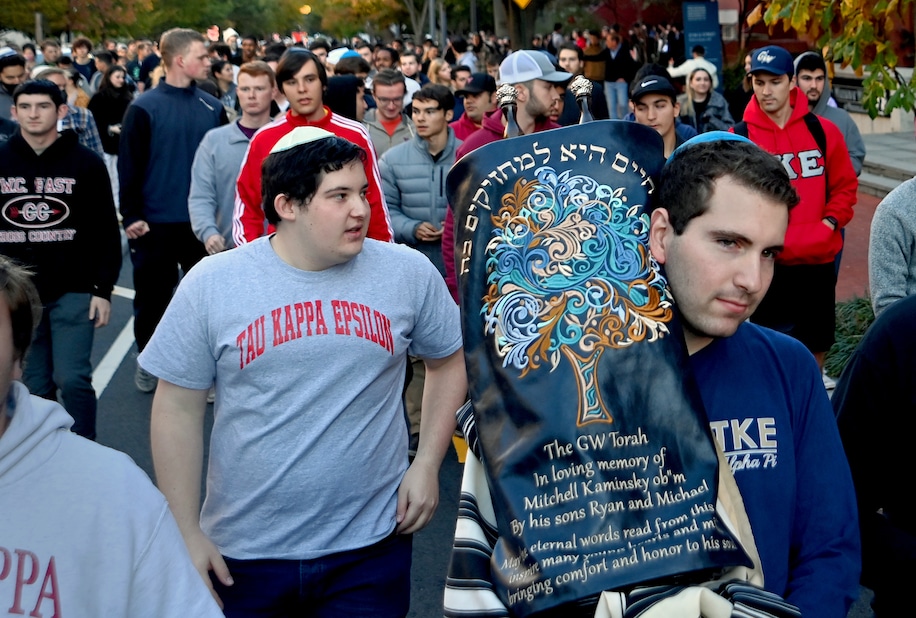 Taking a strong stance against antisemitism on campus, hundreds of students marched from the building of the George Washington University that houses the Tau Kappa Epsilon fraternity to the center of campus to denounce the recent hate-fuelled vandalism of the Jewish fraternity house.

The “Torah Procession and Solidarity Rally” saw an immensely overwhelming turnout, and was led by Rabbi Yudi Steiner, director of the Rohr Chabad at GW. Outside of the Jewish fraternity and sorority houses—Zeta Beta Tau and Alpha Epsilon Pi—the crowd watched as mezuzahs were affixed to the front doors of the buildings. They also listened as a part of this week’s Torah reading was recited at Kogan Plaza on campus.

The rabbi also announced a new initiative to put up mezuzahs, which “proclaims G-d’s protection,” on every doorpost. Just before the rally, Steiner spent time with members of the fraternity, saying that some students were visibly shaken by what had happened.

“I told them to channel this experience into a good one. Our response will determine the end of the story. Someone came and tried to make Jewish students feel attacked; our response was to do the opposite. To parade through the streets and read the Torah aloud,” he said while speaking with the students.

Talking about the rally, Adena Kirstein, director of GW Hillel, said “as always, I remain moved by our Jewish community at GW and motivated to continue to build vibrant Jewish life here on campus. Our students are willing to ask critical questions, exercise Jewish values and stand proudly with our community. This is the true story of Jewish GW, not an act of anti-Semitism.”