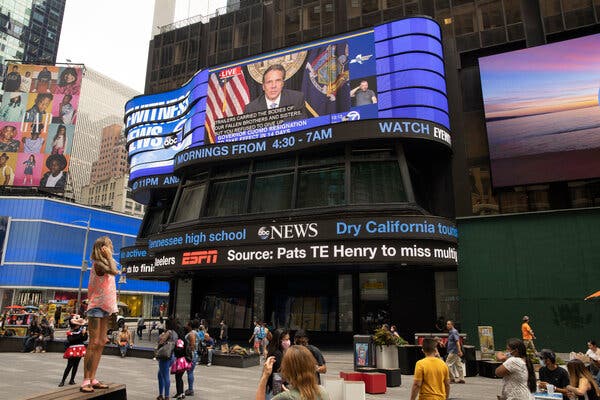 Reactions of Relief Come Flooding In As Cuomo Resigns

In a swift resignation on Tuesday morning, New York Governor Andrew Cuomo bid adieu to his decorated position amidst a massive and damaging sexual harassment controversy that was thoroughly investigated by the Attorney General.

As soon as the Governor announced his decision to step down, reactions of relief came pouring in, considering every major lawmaker, including the President thought that it was about time Cuomo stepped down.

New York Mayor Bill de Blasio, who’d had a longstanding tiff with the Governor, said in a statement on Tuesday, “Make no mistake, this is the result of survivors bravely telling their stories. It was past time for Andrew Cuomo to resign and it’s for the good of all New York.”

Chuck Schumer also gave his inputs, saying, “First, I want to commend the brave women who stepped forward and courageously told their stories. There is no place for sexual harassment, and today’s announcement by Governor Cuomo to resign was the right decision for the good of the people of New York. I have full confidence that Lt Governor Hochul will establish a professional and capable administration. I have spoken with Lt Governor Hochul and look forward to working together to help the people of New York.”

Furthermore, Kathy Hochul, who will become the first woman to lead the state of New York, tweeted, I agree with Governor Cuomo’s decision to step down. It is the right thing to do and in the best interest of New Yorkers. As someone who has served at all levels of government and is next in the line of succession, I am prepared to lead as New York State’s 57th Governor.”

After his resignation announcement yesterday, Cuomo will be given 14 days to complete all essential formalities before exiting his position.