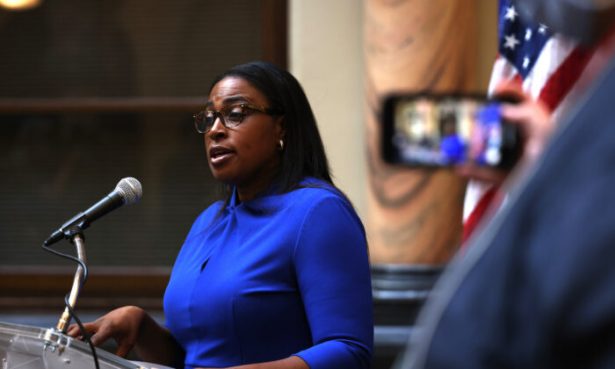 A day after the unsettling video narrating the police killing of Daniel Prude was released to the media, Rochester Mayor Lovely Warren announced seven police officers involved in the March arrest of a Black man who was pinned to the ground and later died have been suspended.

At a News Conference late Thursday, Warren said,  “Mr. (Daniel) Prude lost his life in our city. He lost his life because of the actions of our police officers.” The suspensions come a day after attorneys for Prude’s family released police bodycam video that shows officers covering the man’s head with a “spit hood” (considering the Coronavirus pandemic had taken over New York) and holding him down on the ground, with a knee on his back before he stopped breathing.

Warren said, “some of the officers who were suspended appear on the body camera footage and others had a duty to stop what was happening. They are being suspended with pay against the advice of council.”

The mayor also told reporters on Thursday that she had been misled by the city’s police chief, who she said led her to believe the man died in police custody of an overdose. She saw the body camera footage for the first time nearly a month ago, Warren said.

“Prude was failed by many officials before and during the March 23 incident. He would have been treated differently if he was White,” she added, indicating the racial injustice factor that might have come into play.

Addressing the issue further, Warren said, “Institutional structural racism led to Daniel Prude’s death. I won’t deny it. I stand before it and I call for justice upon it.”

Prude’s family and daughter, Tashyra Prude, are calling for the officers to be fired from the force, with rightful prosecution over her father’s death. Demanding that justice be served, Tashyra commented, “They should be arrested and tried as the killers that they are.”

Taking cognizance of the matter, New York Governor Andrew Cuomo described the video of Daniel Prude “deeply disturbing” Thursday and called for the “case to be concluded as expeditiously as possible.”