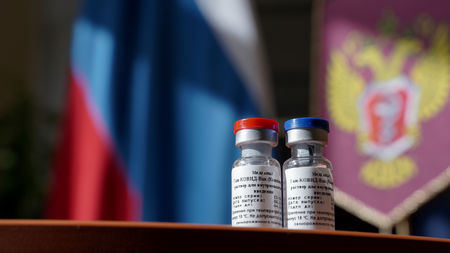 The first batch of Russia’s COVID vaccine is set to be administered on medical staff within the next two weeks. Despite being admonished against “hasty” approval of the drug, Russia has set its eyes on putting “national safety” first.

Numerous countries including Germany, Spain, France, and the US have raised red-flags over the vaccine, deeming it to be highly skeptical in terms of its speed and inadequate clinical testing.

“It seems our foreign colleagues are sensing the specific competitive advantages of the Russian drug and are trying to express opinions that… are absolutely groundless,” Russia’s Health Minister Mikhail Murashko told the Interfax news agency on Wednesday. He added that the vaccine would be available soon.

Developed by Moscow’s Gamaleya Institute, the vaccine is being given to its takers, on a voluntary basis. The announcement that stated that the vaccine would go on floors from the 10th of August was made by President Vladimir Putin, who said the vaccine had passed all the required checks and his daughter had already been given it.

Potentially to be named the Sputnik V, the vaccine is allegedly not among the list of six vaccines that have reached phase three clinical trials, which involve more widespread testing in humans.

With 10% of clinical trials standing successful and the final trials left to be administered away from a laboratory setting, Russia is set to produce over 5 million doses a month, once the trails are out of the way in December-January.

Alexander Gintsburg, Director of the Gamaleya Institute has assured that the due results of the clinical trials would be assessed and studied by Russia’s own experts, without international intervention. Russian officials have also stated that they plan to start mass vaccination in October.

Murashko has also notified that the first packages of the vaccine against COVID will be received within the next two weeks, primarily for doctors and other medical staff.

The first country to grant regulatory approval to the vaccine within two months of human testing, Russia is also in talks with Kazakhstan with regard to the possible deliveries of the vaccine.