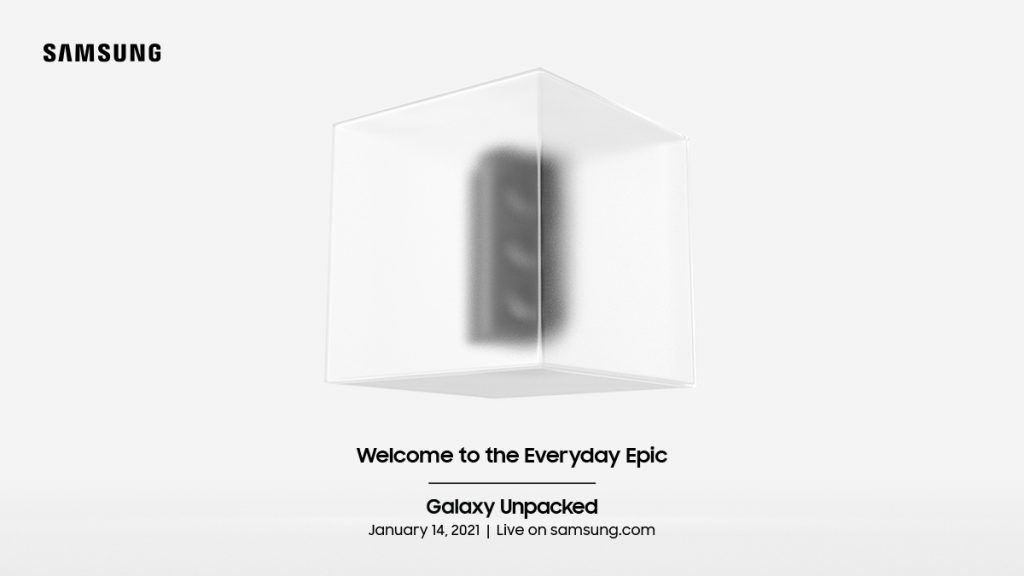 Samsung has announced the details of its annual event which will be held on the 14th of this month. Titled “Welcome to the Everyday Epic”, the event will kick off at 7 AM PT / 10 AM ET and will feature the launch of the much-awaited Samsung Galaxy S21, the next-gen smartphone of the wildly popular series.

Expected to announce the arrival of three new smartphones in all- namely the Galaxy S21, S21 Plus, and S21 Ultra, which will reportedly feature an array of new features and hyped stylus support, Samsung released an event teaser video, which features the Galaxy S21’s camera module floating inside a translucent cube.

Just like the leaks and rumors had suggested, the new phones will sport displays that are slightly around the device edges to totally flat panels, and a redesigned camera bump that melds into the edges of the phone. Other speculations around the phone also include a lower 2400 x 1080 screen resolution for both the S21 and S21 Plus, compared to the 3200 x 1440 resolution used by their predecessors.

According to WinFuture, the S21 may, quite likely, sport a 4,000 mAh capacity battery while the S21 Plus gets a bigger 4,800 mAh battery. WinFuture’s specs confirm Samsung’s Exynos 2100 processor for the European version, with the Snapdragon 888 likely to appear in US devices. The S21 and S21 Plus will offer 8GB of RAM and 128GB or 256GB of internal storage. And of course, the two models will include 5G modems.

It has also been rumored that the upcoming event may feature the launch of the Samsung Galaxy Buds Pro, which had been leaked via an animation. Leaked by Evan Bass, the Buds were seen in three different colors: black, violet, and silver, and are expected to feature active noise cancellation, which should be much improved over the open-ear design of the Galaxy Buds Live. The Pros will also feature a beefier 500mAh battery according to an FCC filing.

Furthermore, according to slides shared on Twitter by WalkingCat, the Galaxy Buds Pro will cost $199 at launch which might be cheaper than both its Apple and Bose counterparts. Samsung’s pro buds will feature strong IPX7 durability against dust and water and up to 8 hours of listening time which can be extended to 28 hours with the charging case.