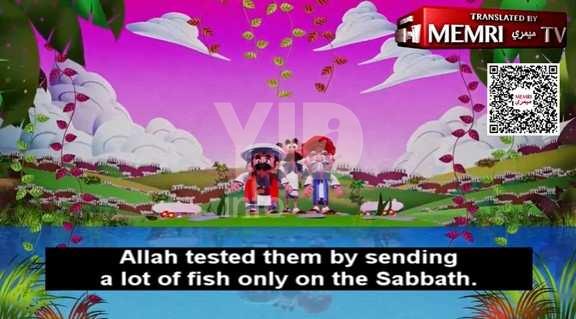 Depicting a story that narrates the Koranic tale of Jews being transformed by Allah into apes for violating Shabbat, a Saudi YouTube channel uploaded a children’s video on October 9th.

The Ibtikar Media channel uploaded the animated video that explains how a group of Jews in a seaside village employed “trickery and deception” to circumvent a divine prohibition against fishing on the day of rest.

According to the video narration, Allah tested the Jews by sending them great numbers of fish only on the Sabbath. “So they employed a trick. They would cast their nets on Friday, the fish would get trapped in the nets on Saturday, and they would collect them on Sunday. As per the story, some of the Jews remained righteous and did not defy Allah’s commandment.

These righteous Jews “would warn the people about Allah’s wrath and His punishment, and would forbid them from doing what they were doing,” but alas, not all adhered to Allah’s instructions.

“When the sinners did not heed the words of advice, Allah’s punishment came upon them at night. The group that commanded good was spared the punishment. The fate of the third group was not mentioned. The punishment of the sinners was that they were transformed into apes…The apes died shortly thereafter, leaving no descendants,” the narrator states.