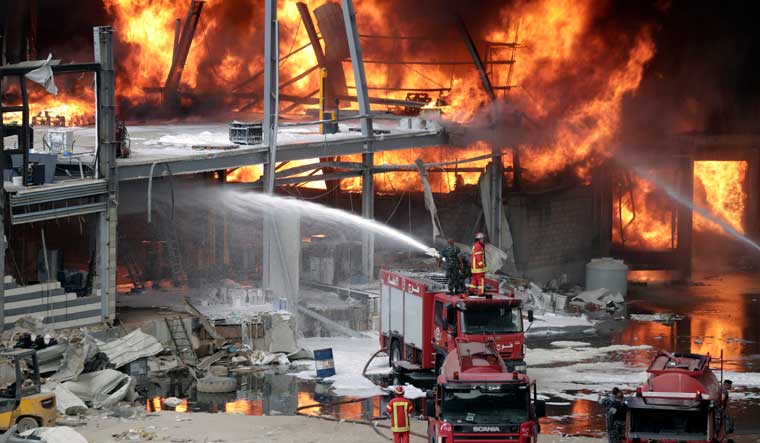 Lebanese firefighters successfully extinguished another towering inferno this week, after the massive explosion in the capital last month.

A major fire broke out at Beirut’s port on Thursday, causing widespread panic in the Lebanese capital, just two days after another fire was put out at the site of an enormous explosion that killed nearly 200 people last month. Reports suggested that the latest blaze erupted at a warehouse that stores tires, in the port’s duty-free zone.

As reported by Al Jazeera, a witness claimed she saw people fleeing from the direction of the fire, which sent a large plume of smoke into the sky. She also saw cars reversing in the Mar Mikhael neighborhood, which was devastated by the August 4 explosion that wounded more than 6,500 people and left hundreds of thousands homeless.

Luckily enough, the fire was brought under control without any casualties or injuries. Sources have revealed that the blaze broke out in a storage area rented from the port by BCC Logistics. It is being said that BCC had been undertaking reconstruction work in the facility when the fire started. Although all health and safety requirements were met at the site, all of the mechanisms that were in place had been demolished in the devastating August 4 blast. The fire extinguishers and alarms were not in place ever since the massive explosion happened last month.

Claiming that public officials weren’t at all associated with the event, especially since the property is considered private, Bassem Kaissi, who was appointed as the new director of Beirut’s port following the blast, told Al Jazeera, “We’re not responsible for it at all.”
Kaissi declined to comment on what may have caused the fire, saying he would wait for investigations to run their course. Investigations have currently been ordered by the country’s Caretaker Justice Minister Marie Claude Najem.

Further destroying the already tarnished port, Thursday’s fire appears to have incinerated respite that was destined for those who survived the blast last month. On Tuesday, another fire had broken out in the capital but was quickly contained.

Amidst all of these unfortunate events, Lebanese citizens are voicing out their concerns and fears and raising questions about possible evidence-tampering amid a continuing investigation into the explosion.