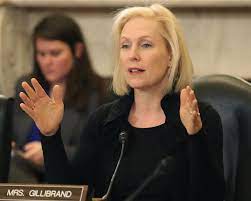 On Monday, Gillibrand, who has made women’s rights a core tenet of her public advocacy, praised New York’s first female governor.

“Kathy Hochul is a proven leader with the know-how, work ethic, and passion for public service to deliver results for New Yorkers in every community,” Gillibrand said.

The endorsement of Gillibrand further strengthened the reelection bid of Hochul who currently leads in polls.

Aside from leading the polls, Hochul also has $22 million in campaign donations and the backing of a number of prominent unions and political figures.

Out to challenge, Hochul in the gubernatorial race are U.S. Rep. Tom Suozzi, a Democrat representing Long Island, and New York City’s elected public advocate Jumaane Williams, the most progressive candidate in the race.

Sources said it is now the first time Williams has challenged Hochul in a statewide election.

Williams ran against her in the 2018 Democratic primary for lieutenant governor but lost by less than seven points.