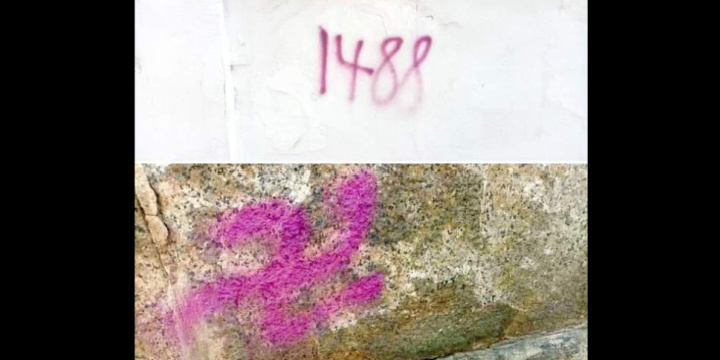 Several Jewish groups from around the world severely condemned

Several Jewish groups from around the world severely condemned the antisemitic desecration of the Sofia Central Synagogue in Bulgaria, which is the largest synagogue in the Balkan region.

This past weekend, the historic Central Synagogue in the Bulgarian capital of Sofia was found laden with antisemitic, white supremacist symbols which included a swastika and the number “1488,” a neo-Nazi shorthand.

According to the Anti-Defamation League, the symbol 1488 — sometimes written as 14/88 or 8814 — refers to a 14-word racist maxim and “Heil Hitler,” H being the 8th letter of the alphabet.  It can be seen in email addresses, screen names, and even the pricing of racist merchandise.

Calling the act a thoroughly shameful one, Bulgaria’s Central Israelite Religious Council said in a Facebook post, “We strongly condemn this action and call on the authorities to find the perpetrators as soon as possible and to impose the most severe sanctions.”

Shameful desecration of the Central Synagogue in Sofia, #Bulgaria. The building was sprayed with swastikas and a '1488' tag – a known white supremacist symbol.

We stand with the local Jewish community and urge authorities to intensify efforts to secure Jewish institutions. pic.twitter.com/7Uw5Qfg2DJ

On Monday, the European Jewish Congress also condemned the act, saying, “We are disgusted by the desecration of the Central Synagogue in Sofia with a white supremacist symbol ‘1488’ and a swastika. We stand in solidarity with the Bulgarian Jewish community and call on authorities to speedily bring the perpetrators to justice.”