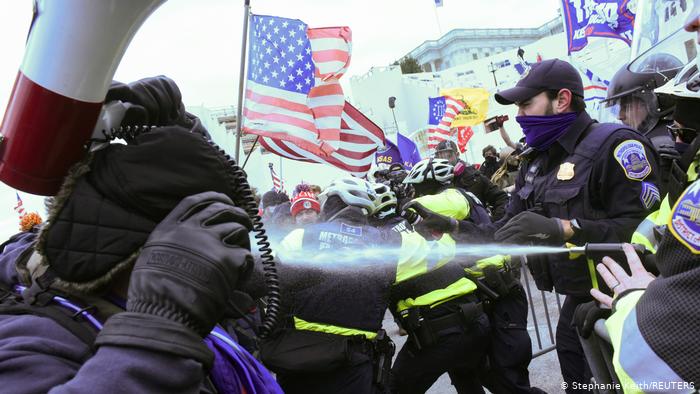 Numerous reports by media houses as well as prominent Twiterattis went on to prove and show that the violence that erupted Wednesday in Washington DC, including the death of one person at the Capitol, was actually Antifa and other violent leftists, dressed as President Trump’s supporters.

In a shocking development pointed out by numerous Twitter handles and local media, many have claimed that the people who stormed the Capitol were actually members of the Anti-Fascist Movement, under the garb of right-wing supporters. Numerous photos of the people who forced their way into the building with tattoos of communist symbols were posted online to prove the theory. Other examples of the people dressed in and using the same tactics as used by Antifa over the riots during the Summer of 2020, were also added as visual evidence, which may point out that this may not just be a conspiracy theory.

Whilst the mainstream media was purportedly picking on pro-Trump groups, some media houses, and social media users upped the ante, calling for a comparison of arrest records and political stances of the people who were arrested. According to these people, it would seem likely that a true investigation into this would show all or a high percentage of far-left Antifa rioters.

Taking to Twitter, user Paul Sperry stated, “Former FBI agent on the ground at U.S. Capitol just texted me and confirmed that at least 1 “busload” of Antifa thugs infiltrated peaceful Trump demonstrators as part of a false Trump flag op.”

Attaching a live video link from the scene, Kyle Becker said, “There were several *INFILTRATIONS* from Antifa dressed up as MAGA. I believe that is who has *STORMED* the Capitol. That’s what’s going on. This was all SET-UP. It was set up to make us all look bad. It is *NOT* patriots.”

In a video posted by Breaking911, the people in the tweet, who were claimed to be “pro-Trump supporters destructing the premise”, were in fact wearing the same gear and using the same tactics used by Antifa rioters during the summer months.

Meanwhile, Sidney Powell posted the image of an Antifa poster on Twitter, which unabashedly read, “On Nov 4th, don’t forget to disguise yourselves as patriots/Trump supporters: wear MAGA hats, USA Flags, 3%ER Insiginas, A convincing police uniform is even better!”

Antifa thinks it can distract America from regaining control over its election integrity. WE see through these antics. They aren’t even smart enough to hide it.#AntifaTerrorists are starting the violence @realDonaldTrump @GenFlynn @realMikeLindell @PatrickByrne @LLinWood pic.twitter.com/F7TMnQp8UB

As written by VIN, “Here’s the question to consider. If it wasn’t Antifa, then isn’t it odd how this MAGA protest had ZERO counter-protest? Where are the counter-protesters? nowhere to be found? Where was the counter-protest that we are all so used to seeing dating from the BLM protests of 2020? Something sure smells fishy….”