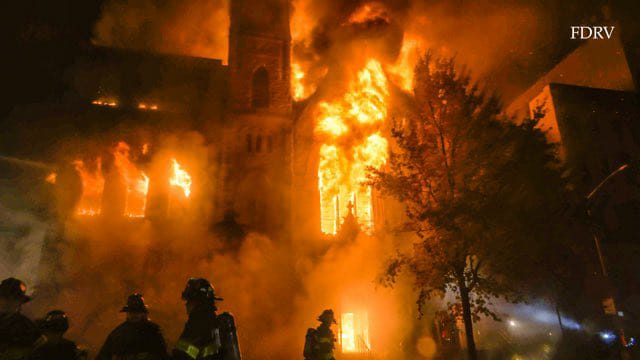 At around 4:48 Am, the FDNY responded to a report of a fire in a five-story vacant building on 2nd Avenue & East 7th Street in East Village, a neighborhood in Lower Manhattan.

The fire started on the first floor of the vacant building and quickly spread to a nearby 128-year-old Church, injuring four firefighters, FDNY officials said.

Around 200 firefighters worked to extinguish the blaze, FDNY officials said. According to the FDNY, it took nearly six hours to bring the fire under control, leaving four firefighters injured.

Middle Collegiate is such an icon of the East Village. I can’t count the number of times I walked past it and took in its humble beauty.@FDNY is continuing operations on the scene. We’ll do whatever we can to help Middle Collegiate rebuild. https://t.co/Fqke8GjQNs