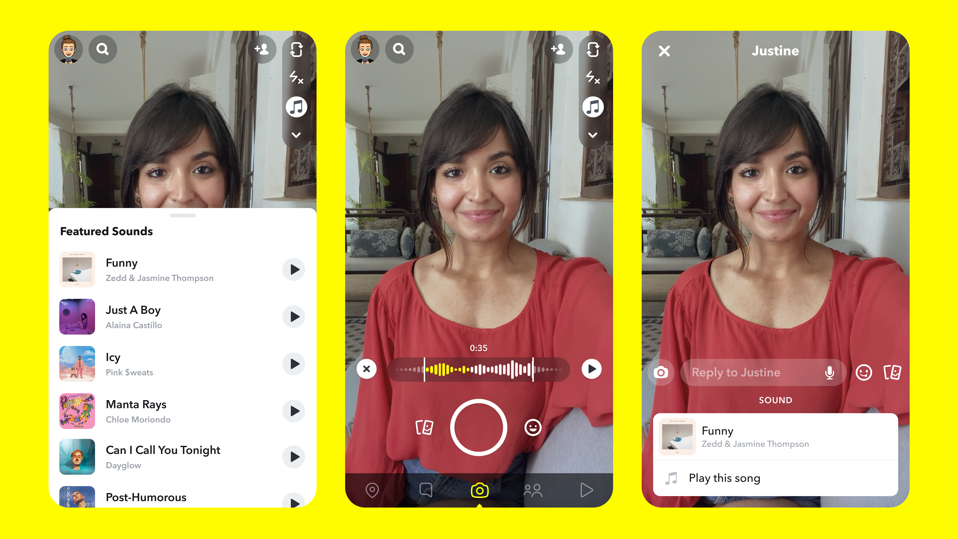 Snapchat Is Now Letting iOS Users Add Music to Their Snaps, and Here’s How

iOS users are in for a treat as Snapchat is now set to feature top charts, or any kind of music, into your snaps. All set to compete with TikTok and Instagram Reels, the company has already announced the feature to people in New Zealand and Australia and will now be bringing music to more regions this fall.

Not made available for Android users as of now, you can try checking out for an update this month, to see if the feature has been added on your devices. The company has also mentioned that it will also be rolling out a feature that allows people to make their own sounds, and that feature will roll out globally in the coming months.

The user experience of the updated version will allow a person who receives a snap with sounds to swipe up to view the album art, song title, and name of the artist. They can also tap the “Play This Song” link to listen to the full song on other streaming platforms, including Spotify, Apple Music, and SoundCloud.

It is still unclear as to where this new feature stands when pitted against Reels and TikTok, but according to statements by Snapchat, the music catalog featured on the app will be “robust and curated.” It also says its licensing deals cover tracks from Warner Music Group, Universal Music Publishing Group, Warner Chappell Music, BMG Music Publishing, and others.

So where can you find it, and if you do, how can you use it?

Keep a tab on your Snap updates on the Apple Store and watch out for a music note symbol on the top right-hand corner of your Snapchat camera screen. If you get access to this icon, go ahead and click on this and you will be able to choose from a list of songs to add to your Snapchats!

Unlike Instagram, there is currently no option to search for a song that you want to add to your Snapchat. Instead, there is only a small list of songs that you can scroll through and choose from. Many users have been disappointed over this, but if the music feature proves to be popular then it seems likely that Snapchat will improve and expand it in the future.