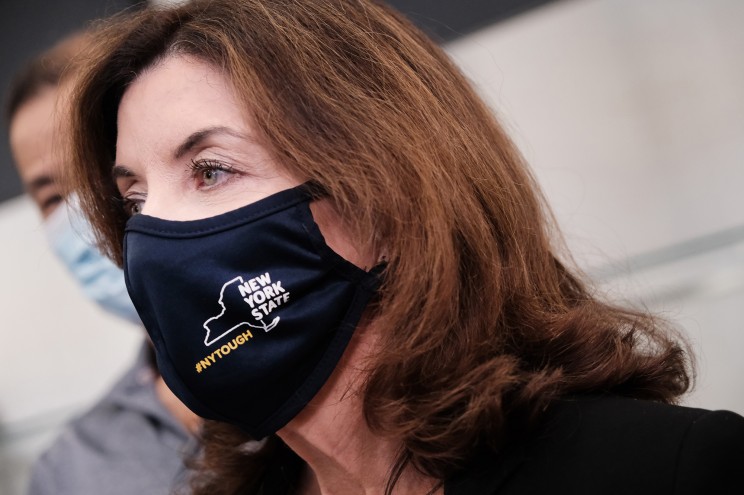 Some Republican officials will not enforce Hochul’s mask mandate

Some Republican country executives are reportedly not too keen to implement the new mask or vaccine order of New York governor Kathy Hochul.

The executives said they will not enforce it since they are not given proper information on its enforcement.

Hochul issued the new mandate on Friday, requiring masks to be worn in all indoor spaces where proof of vaccination is not required, citing New York’s rising Covid-19 caseload as the impetus for her decision.

Violations of the new mandate are subject to civil and criminal penalties, including a maximum fine of $1,000 for each violation.

Republican Rockland County Executive Ed Day said he will not enforce the mandate since the governor’s staff wasn’t even able to provide him with detailed information about the new requirement.

“My decision would be to move the people from the health department who are vaccinating children and others right now with a life-saving vaccine, move them to go walk around to different places to figure out whether people are masking up or not. That would be utterly reckless on my part and I will not do that,” Day said.

Aside from Day, Nassau County Executive-elect Bruce Blakeman will not also enforce it since it is a “shotgun approach,” noting that his country is 97% vaccinated.

“It is clear that Nassau County is not in crisis and State government should paint us with the same broad brush as the rest of the State,” Blakeman said.

“I’m hopeful that the State will allow local determination rather than a shotgun approach,” Blakeman added.

Sources said other counties, including Madison, Niagara, and Rensselaer are also not enforcing the mandate.