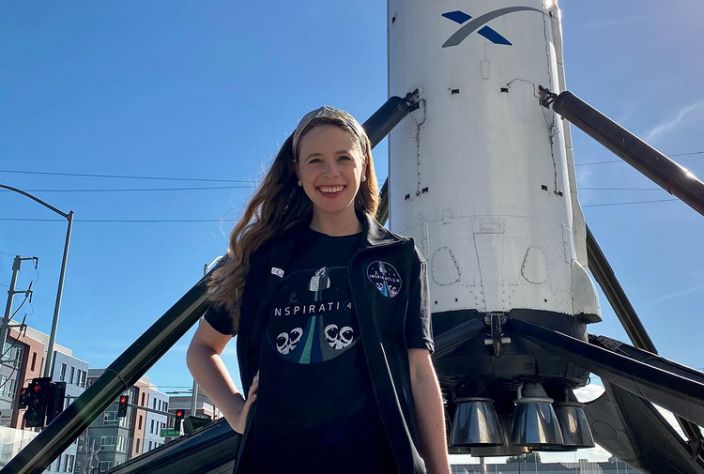 SpaceX Reveals Second Crew Member To Board Its All-Civilian Spaceship

Joining billionaire and Shift4Payments founder Jared Isaacman on an all-civilian trip to outer space, courtesy SpaceX will be St. Jude Children’s Research Hospital employee, and former patient Hayley Arceneaux, who herself is a cancer survivor.

At the mere age of 29, apart from being one of the first civilians to make the journey, Hayley Arceneaux will also be the first person in space with a prosthetic body part. In an announcement from Elon Musk-owned SpaceX on Monday, it was revealed that Arceneaux will be the second person to join the four-person crew on the SpaceX Dragon, which will include a flight to an unspecified orbit for a trip likely spanning a few days when it launches.

Slated to blast off later this year, Arceneaux, at 29 years old, could also be the youngest American to go to space. She will orbit Earth for up to five days in the Crew Dragon capsule as part of the Inspiration4 mission. Crew members are being selected based on “mission pillars of leadership, hope, generosity, and prosperity,” according to the press release for the mission. Arceneaux, SpaceX said, will represent hope.

The epitome of hope, Arceneaux was diagnosed with bone cancer at the age of 10 and had some of the bones in her left leg replaced with titanium as part of her treatment. She was treated at St. Jude, where she now works with children who are being treated for lymphoma and leukemia.

In charge of selecting the crew that would fly by his side, Isaacman tipped that he “already knew” who he’d picked to represent St. Jude during a press call when the trip was originally announced earlier this year, but noted that he was saving the reveal. As it stands now, the remaining two seats will be given by Issacman to winners chosen from two separate ongoing competitions: One pool includes anyone who makes a donation to St. Jude during the course of a fundraising campaign attached to the launch, and the other will be selected from entrepreneurs who build an online store on Shift4’s newly launched e-commerce platform.

The billionaire has also committed to donating $100 million to the hospital from his own funds, in addition to whatever is raised through the public donation drive that will be used to select one of the other crew members.