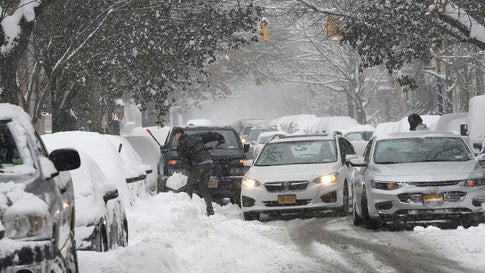 As monster storm’Orlena’ engulfed the Big Apple in thick sheets of snow, on Sunday night, Mayor Bill de Blasio issued a state of emergency order to combat the fury that the phenomenon would bring today. Beginning at 6 AM today, New Yorkers have been urged to stay home and avoid all sorts of non-essential travel.

“This is a very dangerous storm. New Yorkers should stay home, keep the roads clear for emergency vehicles and let our plows work to keep us safe,” de Blasio said in a statement. “Make no mistake: this storm will bring heavy snowfall and it will make travel dangerous in every neighborhood in our city.”

As of today, only those seeking medical treatment or medical supplies and essential workers such as first responders, pharmacy and grocery store staffers, and restaurant and delivery workers will be allowed on the roads.

Furthermore, in-person instruction at the city’s public schools has been scrapped for Monday, with classes moving online, and alternate-side parking was suspended for both Monday and Tuesday. Set-ups in the street for outside restaurant dining will also be suspended Monday, according to the Department of Sanitation. Sanitation Commissioner Ed Grayson said the agency would have about 2,000 staffers working into Tuesday to clear the streets, with more than 700 salt spreaders on hand.

“This is definitely shaping up to be a challenging and unpredictable storm,” Grayson said. “We’ll have all hands on deck.”

De Blasio said earlier on Sunday that coronavirus-vaccination appointments scheduled for Monday had been postponed due to the impending storm, with a decision on Tuesday’s appointments yet to be made. “The last thing we want to do is urge our seniors to come out in the middle of a storm like this. It will be rescheduled quickly,” he said during a television appearance on NY1 with regards to Monday’s vaccine appointments, and quite possibly Tuesday’s too. “We don’t want people out trying to get a vaccination and end up being in harm’s way during this weather,” he claimed.

As reported by The Weather Channel, Orlena is expected to dump between 18 and 24 inches of snow on the Big Apple through Monday and into Tuesday. The heaviest snowfall is forecast for mid-morning on Monday into the evening, with the potential for flakes to come down at a rate of 1 to 3 inches per hour. The mix of heavy snow and gusty winds could lead to blizzard conditions.