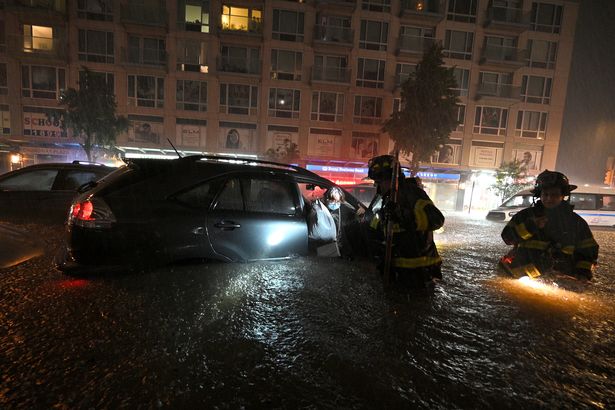 In a catastrophic turn of events on Wednesday night, numerous areas in New York and New Jersey were submerged due to heavy floods, destroying vehicles, businesses, homes, and religious institutions.

Responding to the severity of the situation, both Gov Kathy Hochul and Gov. Phil Murphy declared a State of Emergency- asking people to stay away from dangerous floodwaters to protect their lives.

Asking New Yorkers to stay safe indoors and avoid traveling, Hochul tweeted the state of emergency just after midnight. Meanwhile, Mayor Bill de Blasio stated in his tweet, “We’re enduring a historic weather event tonight with record-breaking rain across the city, brutal flooding, and dangerous conditions on our roads. Please stay off the streets tonight and let our first responders and emergency services get their work done. If you’re thinking of going outside, don’t. Stay off the subways. Stay off the roads. Don’t drive into these heavy waters.  Stay inside. We’re keeping our eyes on our power grid. We’ve seen about 5,300 customers without power.  We expect the rain to stop in the next few hours. But until then, again, if you’re not inside, get inside.”

According to the Weather Service, a flash flood emergency was issued for New York City for the first time ever, and it was only the second time ever that the weather service issued such an alert for the region, with the first being for northeast New Jersey an hour prior. In the early hours of Thursday, Central Park witnesses around 5.20” of rainfall in 3 hours, which broke all records.

Overwhelmed by the need for help, the Community Board 12 and Boro Park Shomrim said in a tweet, “We’re responding to 100’s of calls. We’re currently prioritizing jobs involving children and elderly people trapped in floodwaters. If you’re in need of emergency assistance, call our hotline at 718-871-6666 and we’ll get to you as soon as possible.”

Even the New York subway stations were submerged in water into the night, as flash flooding turned platforms and stairwells into waterfalls as the century-old system ground to a halt. At least a half dozen subway trains stuck between stations were evacuated, according to the MTA, which said service remained “very limited” Thursday morning, due to the havoc that Hurricane Ida had created in New York.

In Boro Park, floodwaters engulfed streets, house basements as well as cars, prompting some residents to go as far as on top of their roofs to avoid getting caught in the water.

As predicted for Thursday morning, the weather is less tumultuous and the sun will reportedly shine throughout the day with minimal to no rains.