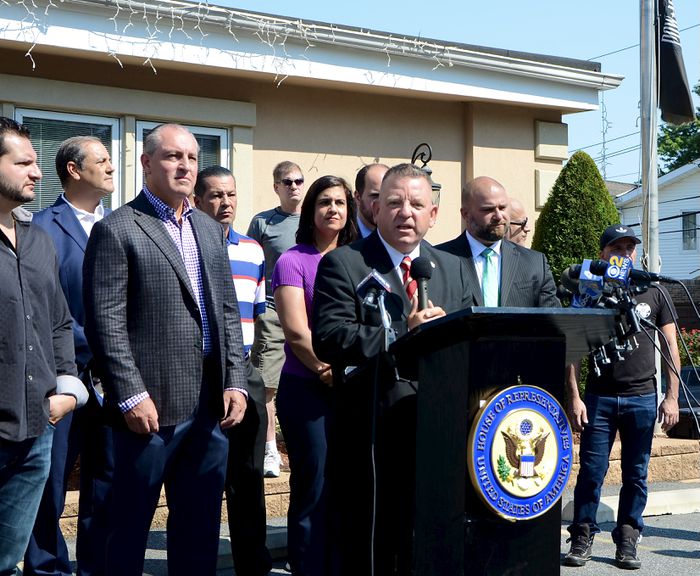 Citing that the order infringes on citizens’ rights, several Staten Island elected officials are set to file a lawsuit against New York City over its coronavirus vaccine mandate for indoor dining, gyms, and entertainment activities.On Friday, Rep. Nicole Malliotakis, state Sen. Andrew Lanza, state Assemblymen Michael Reilly and Michael Tannousis, City Councilman Joe Borelli, borough presidential candidate Vito Fossella, local business owners, and others gathered in front of La Fontana restaurant in Oakwood to announce the impending lawsuit, which will call for an injunction against the recently announced vaccine mandate.It was learned that the New York mandate that will require all patrons and employees at indoor bars, restaurants, movie theaters, performance centers, gyms, and other indoor entertainment venues to show proof of receiving at least one dose of the COVID-19 vaccine to enter will take effect on August 16.Malliotakis said the role of the government is to tell the people of the importance of vaccines and not force them to have themselves be vaccinated before they can enter indoor dining, gyms, and entertainment activities.“The government’s job is to tell the community, tell our constituents why the vaccine is important, why it’s effective, show the science, show the facts and let individual Americans make a decision with their doctor and what’s in the best interest for themselves and their families,” Malliotakis said.Sources said the impending lawsuit will include an equal protection claim based on the belief that the entertainment industry is being “singled out”; will question whether HIPAA laws are being violated by requiring people to disclose their health information, and will contest the constitutionality of the city’s mandate.Some business owners also criticize the mandate saying it is not right.“To be told that three industries shall be deemed responsible for enforcing this state’s will of getting people vaccinated goes beyond reason,” said Charlie Cassara, head of the U.S. Fitness Coalition.“Our industry has been through enough, mayor, and we are here today to tell you, you have no right. You have no authority to dictate to free citizens and business owners who we choose to serve,” Cassara added.