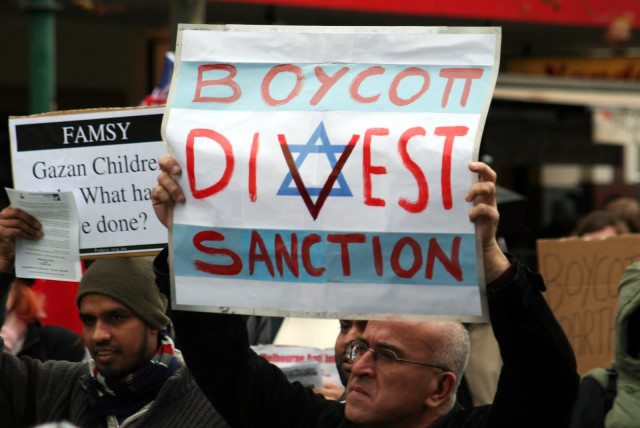 Condemning Israel as an apartheid state, the student government at the University of California, Irvine passed a BDS bill demanding divestment from several companies that do business with Israel.

The bill, which passed by 19 votes to three, rescinds previous legislation passed last year that had repealed another BDS resolution adopted in 2012. Ironically enough, the bill itself included claims that it is not antisemitic, despite its strident criticism of the Jewish state. “We’d like to note that this is in no way related to Judaism,” the bill says, claiming to respect “the distinction between the Israeli apartheid and Judaism” while simultaneously admitting that “Jewish history is intertwined with Israeli history.”

“We acknowledge the cultural and historical significance of Israel as a place of refuge against anti Semitism [sic] for the Jewish people, and this legislation does not take a political stance on the legitimacy of the nation,” the bill says, while at the same time repeatedly referring to Israel as an “apartheid state,” a phrase universally used by anti-Israel activists to delegitimize the Jewish state and call for its elimination.

Reacting to the bill, the American Jewish Committee said, “You can’t just SAY that the antisemitic thing that you’re doing isn’t antisemitic. That isn’t how this works. @ASUCI passed a BDS bill last night claiming BDS is ‘in no way related to Judaism.’ 80% of American Jews disagree. An appalling display of ignorance, @UCIrvine,” they said, posting the results of a poll on the issue.

An ex-senator of the student government at the college, Marshall Roe, spoke to the media, saying, “The student government is currently dominated by a slate endorsed by the anti-Israel group Students for Justice in Palestine, known for its abusive rhetoric and even acts of physical violence against Jewish students. As was to be expected, public comment was a bit wild with 65% being pro-divestment and at least half of those making comment being from outside the campus community.”