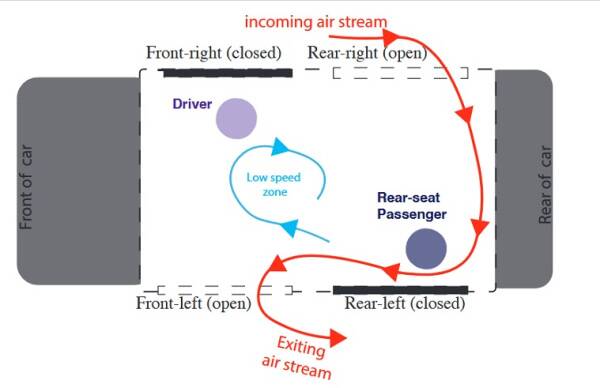 A new study in Science Advances proves that opening up all of the windows in your car is the best strategy to combat the transmission of the coronavirus, but even opening one does help.

Given the chance of catching COVID-19 in enclosed spaces, especially in a car that you may have called to ferry you across town, it’s valuable to now have proof that increased airflow means a decreased chance of catching the virus while riding in a car. This proof has been backed in a study by researchers at the University of Massachusetts Amherst and Brown University, published this month in Science Advances, which looked at “complex airflow patterns that exist inside the passenger cabin of an automobile” and how these patterns affect possible virus transmission between a driver and a passenger. The authors note that a viral load can build up inside the microclimate of a vehicle even on drives as short as 15 minutes, and the virus can remain viable in the air for up to three hours.

The study authors looked at just one basic interior configuration: one driver in a left-hand-drive vehicle and one passenger sitting in the back right of a five-seat, four-door passenger car. They used a theoretical Toyota Prius moving at 50 mph as the model for the vehicle’s exterior geometry. Under these settings, the authors then simulated the in-vehicle airflow under six different window configurations.

According to the study, two scenarios have been listed with comparative results. The first scenario is all windows rolled down- which has been deemed safest. The safest option defined as the situation with the highest amount of air changes per hour (ACH) and thus the most airflow to get potential viruses out of the car is with all of the windows down. The science says that having all of the windows down “establishes two distinct airflow paths within the car cabin, which help to isolate the left and right sides, and maximizes the ACH in the passenger cabin.” This results in an estimated 0.2 to 2 percent of the aerosols exhaled by a driver reaching the passenger. With all of the windows up, this number was around 8 to 10 percent. The second-best configuration is to have three windows down. The fourth window to leave up is the rear passenger window (next to where the passenger is sitting).

In the second scenario, opening the two windows closest to the two people is not that much better for ACH than having all the windows down. Having just these two windows open “does not effectively dilute the tracer particles and . . . the passenger receives a fairly large contaminant load from the driver,” the study says. It’s safer, it turns out, to keep the opposing (that is, the front passenger and rear driver’s side) windows open to create a sort of “air curtain” between the vehicle’s two occupants.

Wearing masks or installing physical barriers in the car, the authors say, can be effective steps as well.