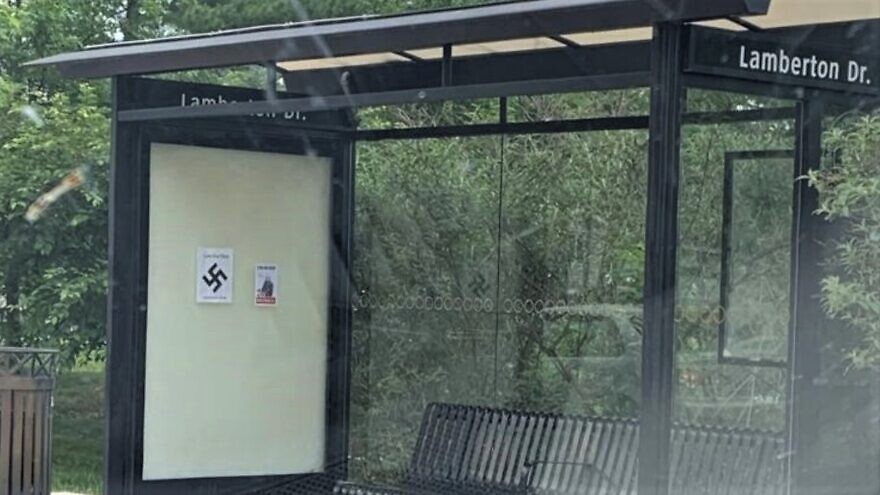 On Thursday, people found a Swastika flyer plastered on a bus-stop shelter in the heavily Orthodox neighborhood of Silver Spring, Md., just outside of Washington, D.C.

The papers were pasted on a bus stop across the street from the Young Israel Shomrai Emunah of Greater Washington synagogue and were a clear act of antisemitic propaganda.

The flyers included a white supremacist website and the words “love your race.” A second flier said “6 million ki*es is that a challenge, we wish” and included an image of a skeleton wearing Nazi regalia.

Reacting to the deplorable incident, the CEO of the Jewish Federation of Greater Washington Mr. Gil Preuss said: “We are deeply disturbed by the appearance of a swastika in the Kemp Mill neighborhood of Silver Spring, Maryland—a center of Montgomery County’s Orthodox Jewish community. This anti-Semitic and hateful symbol has no place in our society. Our Jewish community will continue to stand strong and resilient in the face of hatred and anti-Semitism in all its forms. We are working closely with our security team and the Montgomery County Department of Police to keep our community safe and learn more about this incident.”

The Montgomery County Police is investigating the incident. “There is no place for hate in the Montgomery County and our community will not tolerate any attempts like this to intimidate religious, racial, ethnic, or minority groups in our County,” they wrote. “Today, we stand united with our Jewish residents, particularly our local Holocaust survivors, their children, and grandchildren.”