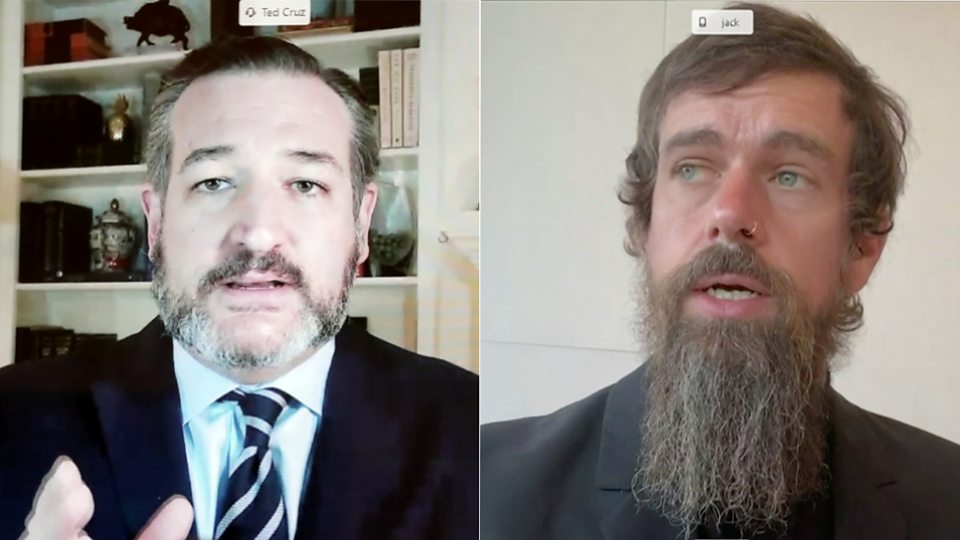 “Who the hell elected you?”- was an exclamation that went on to become the highlight of yesterday’s Senate Commerce Committee hearing on the tech industry’s liability protections and a continuing hindrance to freedom of speech. The hearing featured testaments from heads of Google, Facebook, and Twitter, who were being severely condemned for biased censorship on their platforms.

Senator Ted Cruz took center stage at the virtual hearing on Wednesday as he accused Twitter of forcing users, including media outlets like the Post, to “genuflect and obey your dictates if they wish to communicate with the American people.”

Opening the session by introducing the three heads as “the single greatest threat to free speech in America and the greatest threat we have to free and fair elections,” Cruz went on to criticize the tech giants.

The hearing followed Twitter and Facebook’s self-professed decision to temporarily block the New York Post’s expose on Hunter Biden’s illegitimate foreign dealings worth millions. With conservatives constantly objecting to the bias of Big Tech, this move proved the notion.

Battling with Cruz with a balmy disposition, Twitter CEO Jack Dorsey claimed that the temporary block was due to a policy regarding hacked materials because the stories were based on emails from Hunter Biden’s purported laptop.

To this, Cruz snapped back with an example of the recent New York Times article about President Trump’s tax returns, which in fact, did not face the same treatment, even though the materials appeared to be leaked illegally and were not verified.

Claiming Dorsey’s bias to be “dubious”, Cruz went on to say, “Who the hell elected you and put you in charge of what the media are allowed to report and what the American people are allowed to hear, and why do you persist in behaving as a Democratic super PAC silencing views to the contrary of your political beliefs?”

When Dorsey claimed that neither he nor his company had any intentions to sway people’s opinions and meddle with the elections, Cruz questioned, “You’re testifying to this committee right now that Twitter, when it silences people, when it censors people, when it blocks political speech, that has no impact on elections?”

To this, the honcho replied, “People have a choice of other communication channels.” Furthermore, Dorsey accepted the fact that the policy that blocked tweets related to the NY Post expose was flawed, and that Twitter had now removed the blockade. He claimed that individual users could now share the Post story.

Testing this out soon after the session, Cruz tweeted, “What (Jack Dorsey) told the Senate, under oath, is false. I just tried to tweet the (NY Post) story alleging Biden’s CCP corruption. Still blocked. 18 USC 1621 makes it a felony to lie under oath to the Senate.”

During the hearing, Facebook CEO Mark Zuckerberg claimed that his platform did not censor the story, but that they did flag it for fact-checking and held it back during that process.