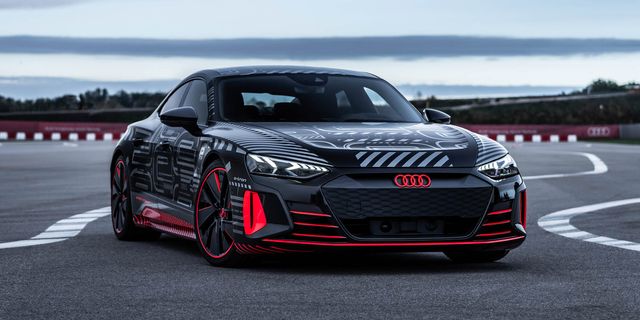 The Audi RS e-tron GT is Set To Appear Next Year, and Here are All the Specs You Need To Know

Set to appear in dealerships mid-next year, Audi revealed quite a few deets about its upcoming RS e-tron GT, packed with 684 Horsepower, and a barrage of other features.

In a tech talk held this week, Audi revealed a few core features of its all-new electric sports sedan, which is claimed to showcase 612 lb-ft of torque and will do zero to 60 mph in less than 3.5 seconds. The battery-powered car will support 800-volt DC fast-charging up to 270 kW and aligns more closely with the base Porsche Taycan.

During the event, a graphic was shown by the automaker, indicating the front and rear motors rated at 175 and 335 kW. That sums to 684 hp, but this combined output figure was immediately contradicted by a slide indicating “Power output: 440-598 PS; Power Output with Overboost: 646 PS.”

The GT will ride on an air suspension with adaptive dampers, which allows for ride-height adjustment based on drive modes. A 93.4 kWh battery pack is standard, and Audi says 83.7 kWh of that is the usable capacity. The weight and location of the battery pack give the RS e-tron GT a lower center of gravity than the Audi R8, according to the automaker.

Both- the brake and wheel options of the car are similar to those of the Porshe. The Brake system is equipped with iron discs as standard, with the low-dust surface-coated intermediate braking package, and the full carbon-ceramic option at the top. Meanwhile, the wheels also draw parallels to the Taycan with 19-inch rollers being the lightest option (at 27.6 pounds each), an intermediate 20-inch wheel serving as the most aerodynamic design, and a top 21-inch option offering the highest overall dynamic capability.

As far as the exteriors of the car are concerned, the car is fitted with laser lighting and an available carbon roof panel. It is also speculated, that as and when the car makes its debut next year, it will be slightly lower priced when compared to the Porsche counterpart, so as to give it an adequate advantage.