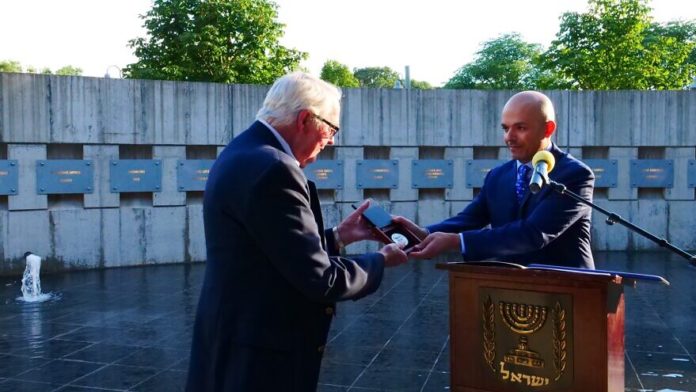 A father and daughter who saved the lives of six Jews in the Netherlands during the Holocaust were honored by the Consulate General of Israel in the Midwest with a “Righteous Among the Nations” ceremony last week.

According to reports, the family members of Hans Boersma and his daughter, Grietja, both of whom have since passed away, came from across the United States for the momentous event, which was held at the Illinois Holocaust Museum and Education Center in Skokie, Ill., just outside of Chicago.

Yad Vashem internationally recognizes those people who are designated as “Righteous Among the Nations” in Jerusalem for protecting Jews from the Nazis while risking their lives.

In Jewish tradition, it is said that when a person saves one life, it is as if they have kept the whole world. Yinam Cohen introduced himself as “Israel’s Consul General to the Midwest.”

According to Yad Vashem, following the German invasion of Holland in 1940, a Protestant female reverend requested that Boerma, 73, hide some Jews on his property. He agreed to take in Ronnie Samuel and Eric Flesseman, two young boys. He also hid a married couple, Benjamin Wolf and Nanny De Jongh, and Grietje hid two girls.

The medal and certificate of honor on behalf of the Yad Vashem commission for the designation of the righteous and the State of Israel were received by Hans Boerma’s grandson, Sam Heeringa.

“Faith let him (my grandfather) do what he did. We can all emulate his efforts in showing humanity in how we treat people, and I hope we all go through our daily lives do just that,” Heeringa said.