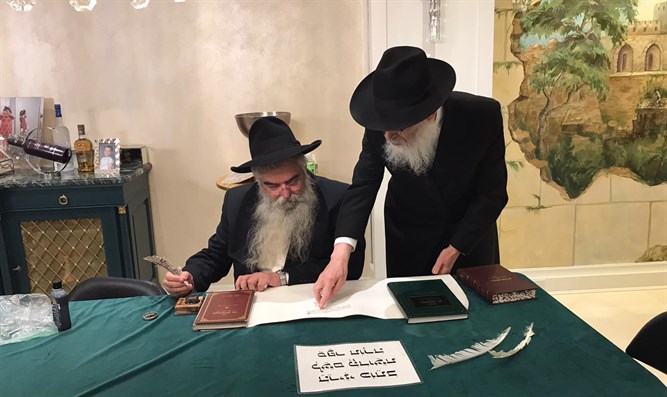 In an effort to unite the Jewish community against the disastrous effects of the COVID-19 pandemic, the Unity Torah was begun in an effort to end the pandemic in accordance with the infamous Baal Shem Tov story. On Motzei Shabbos, the Torah, which will be completed next Sunday, made a special trip to Flatbush and Boro Park, where respected Rabbis of various communities were given the opportunity to inscribe a letter.
The Torah, which has been gathering letters from the global Jewish population, has received immense response, under the guidance of Rabbanim Roshie Yeshivos, and Gedolim, who have stated that the funds gathered will go directly to cover the costs of the Sefer Torah. Any extra funds will be donated to Hatzala who works tirelessly and selflessly on behalf of our communities, every single day.
Attending the event in New York were the Kosover Rebbe – Rabbi Shraga Feivish Hager, Rabbi Moshe Wolfson – Mashgiach of Yeshiva Torah V’daas, Rabbi Dovid Cohen – Posek and Rov of Flatbush Hatzolah, Rabbi Joey Haber – Dean of Magen David Yeshiva, Rabbi David Ozery – leader of Brooklyn’s Syrian Orthodox community, Rabbi Meyer Yedid – Head of Congregation Shaare Zion and Rabbi Reuven Feinstein – Rosh Yeshiva of the Yeshiva of Staten Island. Each of the Rabbis inscribed a letter in the Torah together with Sofer Rabbi Moshe Klein and gave a Bracha for the efforts of the organizers of the Torah.

The United For Protection web portal, where letters can be donated, states that the Unity Sefer Torah gathered a whopping 304,805 letters from around the world as a means to stand against the divisive nature of the pandemic, which has shuttered shuls, schools, and yeshivas, put a stop to joyous Jewish weddings, Bar and Bas Mitzvos, reduced communal gatherings to online interactions that are a pale imitation of the warmth of human touch, and funerals which are being conducted with a minyan, and the mourners mourn alone.
To bring back the sense of community, the letter mimicked Baal Shem Tov’s direction when a terrible disease swept through his town of Mezibush, due to which men, women, and children were falling ill to the epidemic. Out of desperation, the community leaders turned to the Baal Shem Tov and asked him to daven that the plague is banished from their midst.
The Baal Shem Tov responded that the annulment of the decree was in their hands. Only by uniting together in the creation of a new Torah scroll, he explained, would the town be spared. Those who still had their health sprang into action and began raising the funds to commission a new Torah. The Baal Shemtov instructed his personal Sofer to begin writing this Torah. Miraculously, as the Torah was written, the community began to heal. This scroll became known as the “Miracle Sefer Torah.”

Following his footsteps, the worldwide Sefer Torah is now inching closer to the end of being written, with the final stop at Lakewood, New Jersey this Sunday. Post its completion, a grand celebration will take place on December 6, which will be streamed live across the globe at 6:30 PM ET on UnitedforProtection.com.