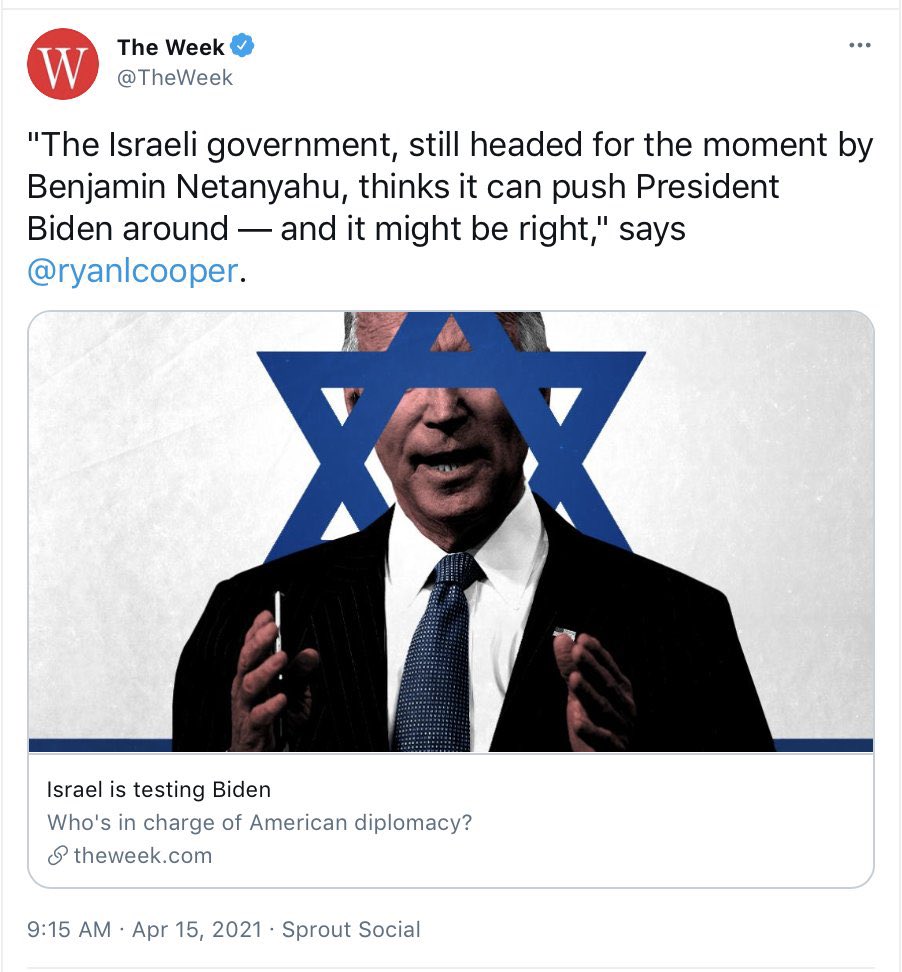 After facing severe backlash towards its blatantly insensitive graphic depicting Biden being encircled by the Star of David, ‘The Week’ took down the above illustration late Thursday, as Jewish leaders and observers condemned the publishing house. What’s worse is that the publishing of the graphic coincided with Israel’s 73rd Independence Day.

The Week magazine removed a graphic that depicted a blue Star of David encircling and covering the eyes of US President Joe Biden, which was published along with a column criticizing Israel’s efforts to prevent a US return to the 2015 Iran nuclear deal. Titled- “Israel is testing Biden,” the article written by The Week national correspondent Ryan Cooper stated that Israel “clearly thinks it can interfere with America’s pursuit of its strategic interests,” taking issue with the attack on Iran’s nuclear enrichment facility at Natanz that has been attributed to Israel, as parties to the 2015 deal meet in Vienna for talks to revive it. The six-pointed symbol is a reference to the Biblical king and his legendary “shield” and has become the most common image symbolizing modern Jewish religion and heritage.

Who wore it better? @TheWeek or @nytimes pic.twitter.com/ynvQKjpkE2

The graphic that was featured with the article faced immense flak from Israeli readers and leaders who deemed it to be a classic case of antisemitism. Reacting to the graphic on Twitter was StopAntisemitism.org which said, “Who wore it better?” whilst drawing a comparison between an infamous 2019 New York Times cartoon that triggered widespread accusations of bigotry.

As reported by The Algemeiner, Rabbi Abraham Cooper, associate dean of the Simon Wiesenthal Center, claimed that the image suggested that Israel was “boxing in, or controlling, or even imprisoning the President of the United States.”

“The assumption here is that the that Israel controls America, or controls the president; it’s very convenient,” Cooper said. “The only possible reason that they can think about the US may be doing something or hesitating to make a move on Iran is that it’s dictated by Israel — it’s ludicrous on its face.”