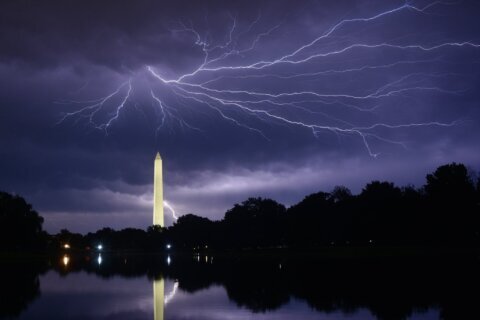 Thousands Face Power Outage In NY Due To Thunderstorms

Severe storms wreaked havoc on northern parts of the tri-state, taking down trees and flooding the roads in the mix. There were a number of felled trees across Dutchess and Ulster counties, with the city of Kingston appearing to have faced the brunt of the harsh weather.

Along with the hail, the rain was reportedly so torrential at moments, that visibility was near zero as the storms passed. Several streets were left flooded at least temporarily after dealing with the deluge of rain. Powerful wind gusts also rocked the area, with gusts as strong as 51 mph reported in Rhinebeck.

As of midnight Thursday, more than 14,000 customers were without power throughout the area, the vast majority in Ulster County. Officials said it could take days to fully restore the power.

In response, Gov. Kathy Hochul on Twitter addressed the power outages in the area, telling those impacted where to turn and providing safety tips. Apart from providing helpline information in the event of an outage, she also reminded New Yorkers to Unplug electronics, refrain from using generators inside, and keep refrigerators and freezers closed.

Looking ahead, throughout the tri-state, the chance for rain and thunderstorms returns Thursday afternoon, and the next chance for showers and storms for much of the region returns Sunday night into Monday, and could even last into Tuesday.