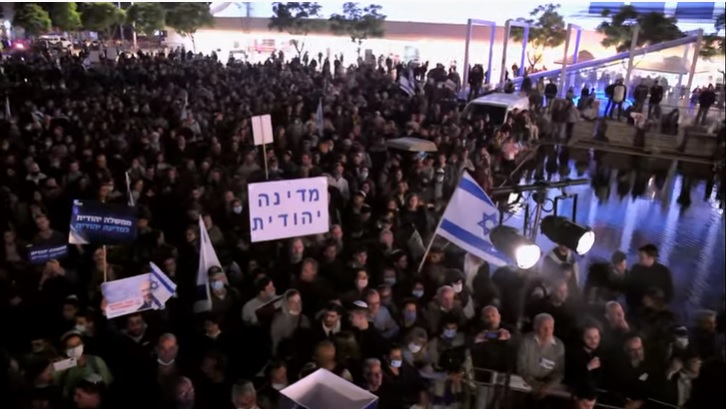 Vouching for a Jewish state amidst a political scenario that aims at religious reforms, thousands of Israelis were Mekabel Ol Shamayim in a huge right-wing protest.

Leading the protest and addressing the crowd was HaRav Yitzchak Batzri from Yeshivas Hamekubalim, who spoke about the abysmal state of Judaism in the US, where the assimilation rate is so high, and compared the scenario to Israel- which would be a reality if the coalition was successful in its devious plans to harm religion.

“They want to bring it here and eliminate the Jewish nation. They feel it when we succeed in being oisek b’Torah. They say not to put on tefillin in Tel Aviv and we do anyway. It hurts them that we’re helping Jews to keep Shabbos in accordance with halacha. I bless the left-wing politicians that you do teshuvah.”

Meanwhile, protesters held signs stating: “A Jewish Government for a Jewish State,” Bibi The King,” “Bennett Is Dangerous To Israel,” “Return Democracy to Us.”

Also addressing the crowd was Likud Mk Shlomo Kari, who said, “A government has arisen in Israel that every day sells our national safety to the Shura Council, Shabbat to [Labor chairman] Merav Michaeli and her friends, kashrut and giyur to Lieberman and Malinovsky who are fighting a bitter war against Yahadus, and the remnant of our Beis Hamikdash to the Reform MK Kariv and his friends. This is the most serious battle. They’re ready to destroy our Jewish identity, our national resilience, with their own hands for the sake of a position, a job.”