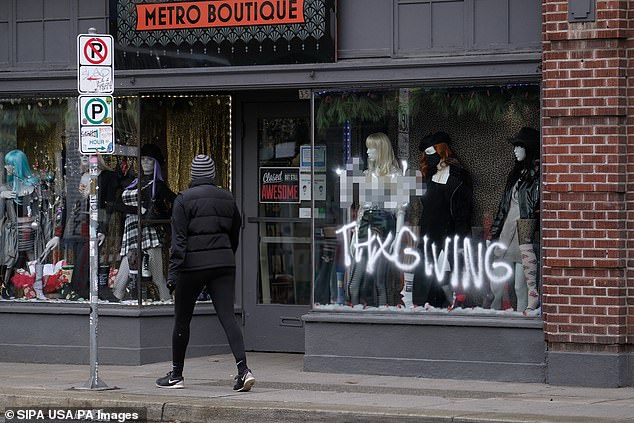 On Thursday morning, a Portland war memorial was seen left in shambles, with graffiti spread all over it. According to the Police, the Memorial in Lone Fir Cemetery was vandalized overnight, along with 10 other businesses, with the words F**k Thanksgiving’, ‘decolonize’, and ‘colonizers’ were written on them.

Suspected to be the work of Antifa members, authorities said they arrested 24-year-old Chester Hester, 38-year-old Nicole Noriega, and 23-year-old Bailey Willack, and one of the group members was carrying a semi-automatic pistol and could face weapons charges. They were booked into the Multnomah County Jail, and each faces 10 counts of first-degree criminal mischief.

During the vile act, a statue on top of the memorial was toppled and sprayed with red paint, defiled to the fullest extent, and at least 10 other businesses were vandalized overnight, according to police. Businesses sustaining damage include banks, an auto service center, a shipping store, and other storefronts.

Portland police said they responded to reports of a group of people smashing windows and spray-painting graffiti on buildings, and it is suspected that there may be more members who had partaken in the nefarious activity.

Suspected to have been linked to an Anti-Fascist agenda, the protest took place after a call to action on Wednesday urged indigenous protesters to attack symbols of colonialism, capitalism, and gentrification. Members of Antifa said in a Facebook post that they’re ‘tired of seeing white people celebrate the genocide of our ancestors’. ‘F**k thanksgiving,’ the post reads. ‘Organize your own direct action’, read the post, which may have led the vandals to take this action.

President Trump has, on several occasions, proposed the US designate Antifa a terrorist organization, but experts say it’s just a loosely organized movement, which seems biased given the live examples over the past few years. Antifa is a left-wing anti-fascist political movement that comprises an array of autonomous groups that aim to achieve their objectives through the use of both nonviolent and violent direct action rather than through policy reform. Antifa political activists are supposedly anti-racists who engage in protest tactics, seeking to combat fascists and racists such as neo-Nazis, white supremacists, and other far-right extremists. This, in several instances, has involved digital activism, harassment, physical violence, and property damage against those whom they identify as belonging to the far right.