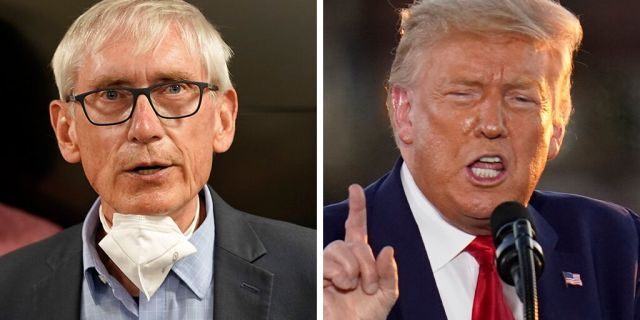 Trump Asked to “reconsider” visit by Wisconsin Gov. in Fear Of ‘Hindering Healing’

President Donald Trump has announced his plan to pay the city of Kenosha a visit, to meet with law enforcement officials and survey the damage posed after a week of heated protests. Scheduled to happen tomorrow, Trump has been requested by Wisconsin Governor Tony Evers to refrain from visiting, as it might only make matters worse.

After taking cognizance of the incident by addressing the Kenosha Police for the first time in a week after the Jacob Blake shooting, a White House pool report claimed that the president would be making his visit to the Wisnconsin city on Tuesday. In a reaction to the shooting, on Friday Trump told CNN, “It was not a good sight. I didn’t like the sight of it, certainly, and I think most people would agree with that.”

Following the report, Governor Evers too to penning down a letter, appealing President Trump not to make his visit since it would hinder peace in an already disturbed city. Urging him to “reconsider” the visit, Evers said the past week has been “particularly difficult” and communities across the state are dealing with “extraordinary grief.” Stating that the city has been plagued with the heartbreak of division, the communities are still working on rebuilding themselves.

In the letter, Evers expressed “I, along with other community leaders who have reached out, are concerned about what your presence will mean for Kenosha and our state. I am concerned your presence will only hinder our healing. I am concerned your presence will only delay our work to overcome division and move forward together.” He also stressed upon the fact that he is concerned an in-person visit from Trump “will require a massive redirection” of resource to support his visit “at a time when it is critical that we continue to remain focused on keeping the people of Kenosha safe and supporting the community’s response.”

When asked about that shooting at a media conference on Saturday, Trump said he would comment on it in 24 to 48 hours after receiving more information. With a passing reference of Jacob Blake at the RNC and an assurance that the National Guard is doing their best, his sole claim was “With Kenosha, it’s been in very, very good shape from the moment they (The National Guard) set foot in that area.”