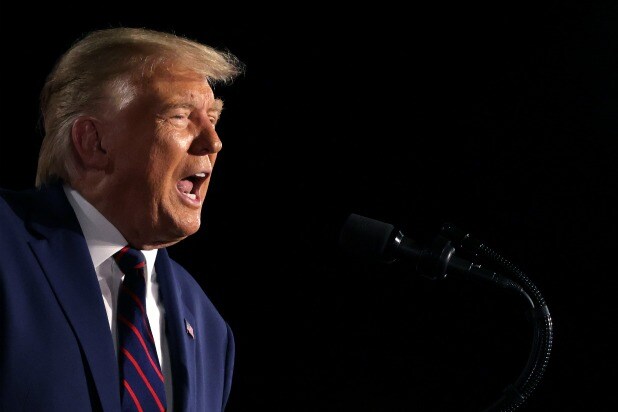 Defending Kyle Rittenhouse, the Illinois teen who shot three protestors in Kenosha, two of whom lost their lives, President Donald Trump said 17-year-old ‘was just trying to get away from’ protestors and ‘probably would have been killed’.

At a White House press conference on Monday, Trump declined the opportunity to condemn Kyle Rittenhouse, the 17-year-old who killed two people during a protest in the wake of the brutal police shooting of Jacob Blake in Kenosha, Wisconsin. Instead, the president took to defending the teen by claiming that he might have undertaken the shooting as a means of self-defense.

Arrested, detained, and charged for homicide, Kyle Rittenhouse fatally shot two men, Anthony Huber, 26, and Joseph Rosenbaum, 36, and wounded a third, after attending the Black Lives Matter demonstration armed with a semiautomatic rifle last Tuesday. According to viral mobile footage, the teen claimed that he had come to the city to ‘protect businesses from protesters’.

When asked by the press if he would comment and condemn Rittenhouse, Trump appeared to blame the victims for “violently” attacking the gunman. “He was trying to get away from them,” Trump said, and Rittenhouse “fell, and then they very violently attacked him”.

He further added that the incident “was something that we’re looking at right now and it’s under investigation but I guess he was in very big trouble he would have been, he probably would have been killed”. Before making this statement, White House spokeswoman Kayleigh McEnany had said “The president is not going to again weigh in on that (the Rittenhouse incident).”

Whilst the National Guard has been deployed in the city, there have been nightly protests in Kenosha since 29-year-old Jacob Blake was shot by the police seven times as he tried getting into his car on August 23. Paralyzed due to this brutality, Blake is still under-recovery in the hospital. Authorities have maintained he was reaching for a knife when police opened fire in front of Blake’s three children.