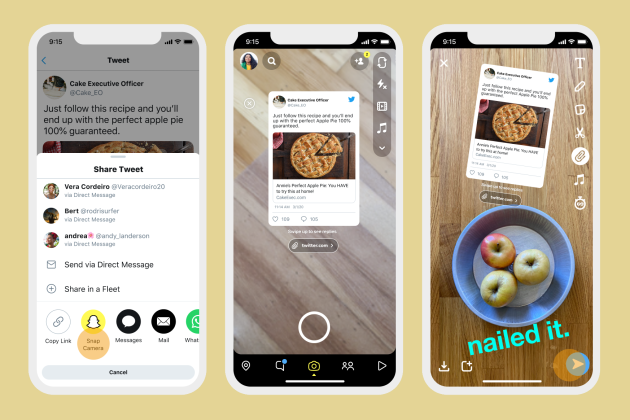 Tweets Can Now Be Added To Snapchat Stories on iOS

Twitter announced on Thursday, that iOS users will now be able to add tweets directly into their Snapchat snaps, providing more options for sharing tweet conversations. Soon to be updated into Android, Instagram has also hinted at a similar update soon.

This week onwards, you can make tweets a lot more visible via cross-app sharing on Snapchat. iOS users will now be able to add tweets into a snap as a sticker, which was earlier only limited to a plain-old screenshot that had to be clicked and shared as a regular, un-linked image in your snap. With this new feature, Twitter is staying a step ahead in ensuring that tweets reach far and wide, with the help of more social media platforms- leading to more visibility.

Now, with this official linkage back to the app, Twitter could essentially drive more Snap users back to Twitter to view the expanded discussion and encourage more people to use the platform.

If users want to share tweets via their Snaps, all they need to do is press the share button on a public tweet (private tweets aren’t supported) and select the Snapchat icon from the share carousel. You can then create a snap as usual, except you’ll have your selected tweet as a sticker that you can manipulate. Users can then share the snap as you would any other — sending it to people, or adding it to your story, and whoever sees it can go to the tweet by swiping up. Once shared, the Snap will link back to the tweet on Twitter where you can see the whole conversation.