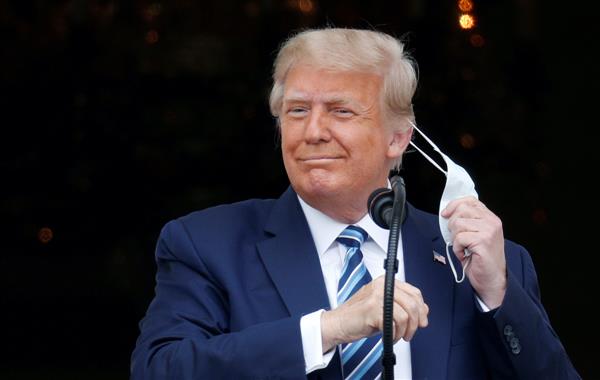 On Sunday afternoon, Twitter took to flagging President Donald Trump’s tweet, claiming it as a source of misinformation. After posting that he was probably immune to the virus, Twitter quickly took to adding a disclaimer, that read, “This Tweet violated the Twitter Rules about spreading misleading and potentially harmful information related to COVID-19. However, Twitter has determined that it may be in the public’s interest for the Tweet to remain accessible.”

This action by Twitter is in line with its policy that it rolled out this May, in which it announced that it will begin labeling coronavirus-related tweets that contain potentially misleading information but that don’t clearly violate company misinformation policies.

Updating citizens about the status of his health after being diagnosed with the Coronavirus two weeks ago, President Trump claimed, “A total and complete sign off from White House Doctors yesterday,” Trump wrote. “That means I can’t get it (immune), and can’t give it. Very nice to know!!!”

Although viewers can still see the tweet, a comment has been added, citing a misinformation warning, commenting, and sharing options have been disabled. On Saturday, White House physician Dr. Sean Conley had said that the president was no longer considered a ‘transmission risk’ to others. In a written memorandum, Dr. Conley said: “This evening I am happy to report that in addition to the President meeting CDC criteria for the safe discontinuation of isolation, this morning’s COVID PCR sample demonstrates, by currently recognized standards, he is no longer considered a transmission risk to others.”

Not the first and only time to have said this about his health post his battle with COVID-19, the President spoke to Fox News on the same day, on “Sunday Morning Futures” with host Maria Bartiromo. During the course of the interview, the President claimed that he was immune to the virus. “Yes, and not only that, it seems like I’m immune, so I can go way out of a basement, which I would have done anyway,” Trump told Bartiromo.

As of now, there has been no conclusive evidence of the President being tested negative, but he is to ensure that his health does not cause a hindrance in his work leading up to the November elections.