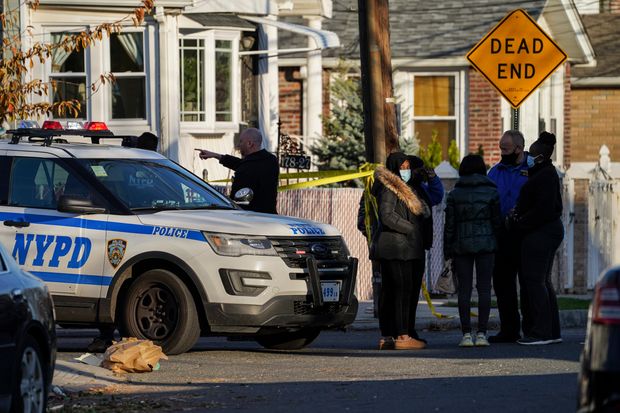 A series of unfortunate events unfolded on Tuesday when two police officers from the NYPD responded to a call on 179th Street near Guy R. Brewer Boulevard in Springfield Gardens just before 1 p.m.

Responding to a domestic violence call, two New York City police found themselves in a violent situation wherein they had no choice but to defend themselves after being shot. The on-duty officers shot and killed an off-duty college security officer on Tuesday after he opened fire and wounded them, Police Commissioner Dermot Shea said.

The Police, in a statement soon after the officers were rushed to the Jamaica Hospital, said the 41-year-old City University of New York peace officer Rondell Goppy opened fire first and was shot and killed by the officers in self-defense.

According to Police Commissioner Dermot Shea, Goppy’s wife walked into the 105 precinct station house Tuesday morning to report a domestic violence incident that took place Monday night. “At around 12:40 p.m., she returned to her home with two domestic violence officers”, Shea said.

According to Shea, Goppy was not home when they arrived, but he walked into the house a short time later. “After about six minutes, he comes into the residence and starts shooting. Whether he was lying in wait or just happened to arrive at that time will be part of the investigation,” Shea said, talking to reporters outside the hospital where the two officers were being treated towards recovery.

Providing additional information on the condition of the injured officers, Shea added that both were awake and stable. Officer Christopher Wells, 36, was shot in the leg and needed surgery to repair a fractured femur. Officer Joseph Murphy, 33, was wounded in the hand and also required surgery for his injuries.

Reacting to the incident, Mayor Bill de Blasio said, “Here you have officers who do the lord’s work. They protect survivors of domestic violence. They go into some of the most volatile, difficult situations that you can possibly imagine. They do it to protect innocent people who have been victims of abuse. And here we have a situation where a woman was in danger and these officers went in to protect her only to find themselves in harm’s way immediately. Thank God they’re going to pull through.”

“Today they saved that woman’s life. I want to be crystal clear. Because those officers were there, that woman is alive, and I say God bless them,” de Blasio added.