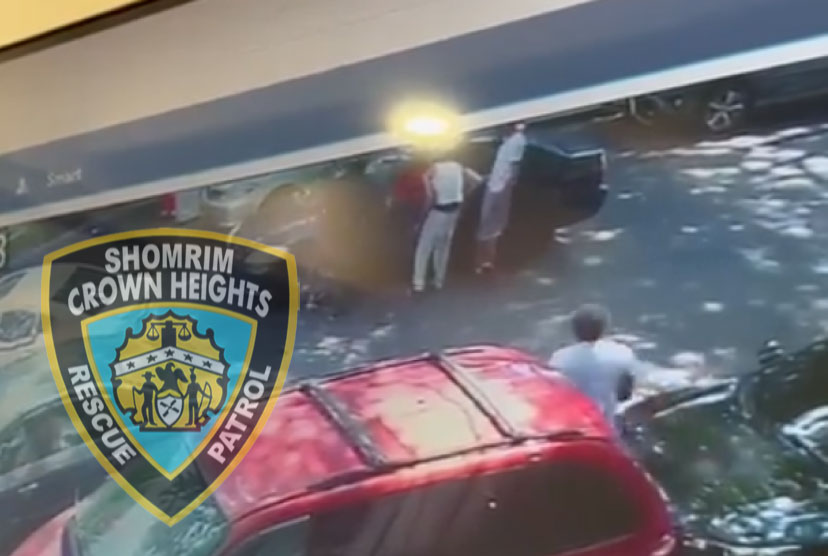 Update: NYPD has made an arrest in the case. Thank You NYPD.
A special thanks to @ShomrimCH, @ChabadLubavitch, CO Inspector Richie Taylor of @NYPDCommAffairs & @joeleisdorfer of @NYCMayorsOffice for their pursuit of justice and care.

After thugs brutally assaulted Crown Heights community activist Yossy Hershkop two weeks ago, on Wednesday, July 13, in front of his five-year-old son, Yossy has been waiting to see the first glimmer of justice. There have been no results, though, despite a video of the assailants and their vehicle. Frustrated with a system that seems to have ground to a standstill, if it ever moved at all, Yosef voiced his frustration today on Twitter.

I was attacked 2 weeks ago. No arrests have been made, despite the assailants' vehicle having been seen all over the neighborhood. My son still has a lot of trauma from the incident & we now Uber instead of walk whenever we need to go out. How many others live in fear in NYC?! https://t.co/hI4LdcjtfA

Geoffrey Davis, the Founder of James E. Davis Stop Violence Foundation and author of the popular children’s book Love Yourself, Love Each Other, spoke with Yid Info about his own frustration with the lack of an arrest.

“It is one hundred percent unacceptable!” he told Yid Info. “We have to change the narrative. A human being was brutally assaulted, and the criminals need to be arrested and convicted so a young man can get the justice he deserves. Every elected should support and surround Yossy and his child and wife. This hasn’t happened, and that itself is a crime.

“And once there is an arrest, we have to stay active. We can’t get lazy. The community needs to get involved and push the District Attorney’s office and make sure to get a conviction. After an event like this, step one is to support the victim. The second step is to get an arrest. The third step is to go to arraignment and make sure the criminals are arraigned and with bail. Fourth is to stay on top of the district attorney to ensure they get a conviction.

“The court and the police work for us. We have become too nice and forgiving. If people are let go under the DA’s watch, we need to remember that he’s an elected official, and if he doesn’t work for us, we let the community know, and we vote him out. We have to change the narrative and get involved.”

Davis spends time with Yaakov Behrman – walking the streets of Crown Heights together, working to change the narrative.

“They call us the Odd Couple,” Davis says. “Crown Heights is a big community of almost 200,000 people. These small steps are doing good, yet there are always knuckleheads. We have to work to get justice because the system is backward and pro-criminal, which means we have to work ten times as hard to change the narrative, but otherwise, we let hate win. We have to continue to work and teach children not to grow up in that way.”

Davis went on to say he has invited Yossy’s five-year-old son to come with him to a baseball game in Coney Island in August.

“You have to change the narrative in his life too,” Davis says. “Otherwise, he’ll only remember that black people attacked his father. I’m bringing black kids too, and we’re all going to watch a baseball game together in Coney Island.”

In the meantime, Yossy continues to wait for justice to begin to be served and for a small step in the right direction to be taken towards eradicating fear in young and old alike in Crown Heights and beyond.