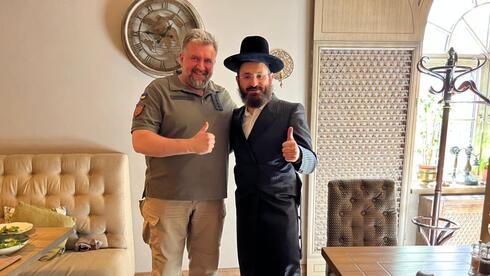 Rav Hillel Cohen, who has been assisting Jewish soldiers in Ukraine for months, has been officially appointed the Chief Rabbi of the Ukrainian armed forces.

According to reports, Rav Cohen has been living in Ukraine for 23 years and working in kiruv. He explained how he began aiding Ukrainian soldiers amid his lifesaving work of assisting thousands of Jews to flee the country. “While I was helping rescue Jewish refugees in Ukraine, I began to receive requests from Israelis and Ukrainians regarding military aid. There was an Israeli whose brother was drafted into the army, and I helped him obtain a helmet and a vest from Israel. I also purchased 20 helmets and 20 bulletproof vests from a friend in the country and gave them to a group of Jewish soldiers who were training in Kyiv.”

Soon afterward, people began hearing about Rav Cohen’s work and he received requests for assistance from men who wanted to enlist in the Ukrainian army but were rejected. He initiated his first contact with senior Ukrainian military commanders in an effort to assist them.

In his last visit to Israel, Rav Cohen purchased tefillin cases that are specially designed to survive under harsh combat conditions.

Rav Cohen’s duty as a military rabbi will be to raise morale and to help the troops through difficult situations. In the Ukrainian army, there are approximately 1,000 Jews, which is a significant minority among the 800,000 soldiers in service.