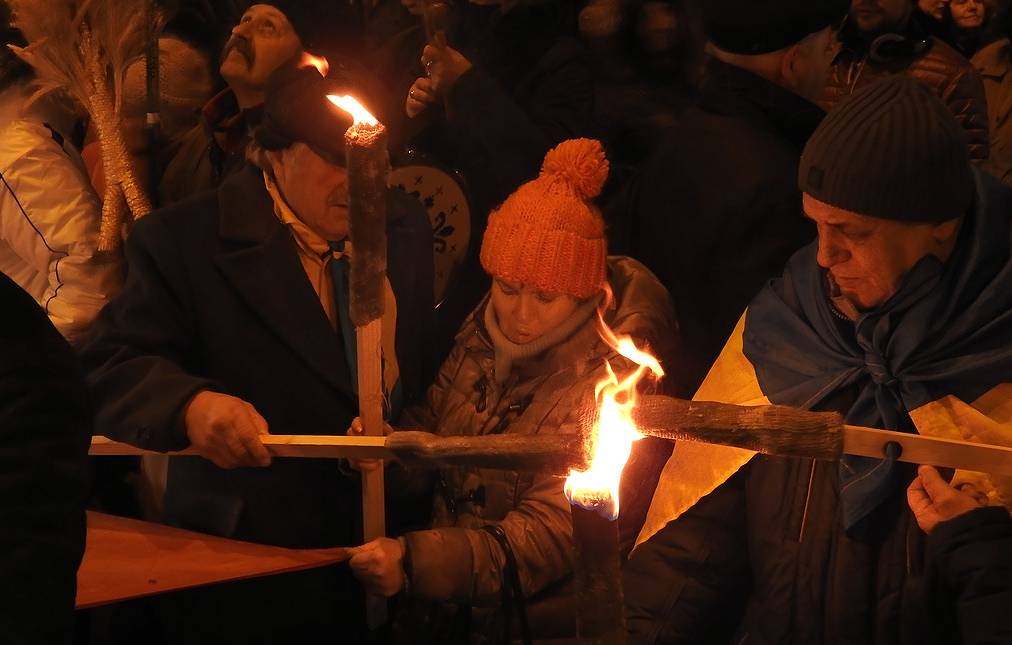 In the midst of growing nationalistic sentiments, Ukrainians on Friday evening, marched with torches, paying tribute to Stephen Bandera, who had collaborated with Nazi Germany, claiming that he was their “prophet”. Bandera has often been glorified by some as a leader of Ukraine’s liberation movement but has been strongly condemned by others as a Nazi collaborator.

During World War II, Bandera led the Ukrainian Insurgent Army, whose men killed thousands of Jews and Poles, including women and children, while fighting alongside Nazi Germany against the Red Army and communists. Bandera’s supporters claim they sided with the Nazis against the Soviet army, believing that Adolf Hitler would grant Ukraine independence. This being said, Bandera remains a controversial figure in Ukraine, glorified by many in western Ukraine as a freedom fighter but dismissed by millions in eastern and southeastern Ukraine as a traitor to the Soviet Union’s struggle against the occupying German army.

On the other hand, in eastern Ukraine, Bandera has entirely different connotations. Pro-Russian separatists see him as an ally of Hitler, a fascist who was responsible for killing tens of thousands.

In an annual show of commemoration, thousands of Bandera’s followers showed their solidarity in playing down his collaboration with the Germans in the fight for Ukraine’s independence as the leader of the Organization of Ukrainian Nationalists, Ukraine’s foremost nationalist organization in the first half of the 20th century.

Carrying torches, many participants waved banners carrying the symbol of the far-right Svoboda party, whose leaders have often made anti-Semitic comments, and banners reading: “Nationalism is our religion. Bandera is our prophet.”

Meanwhile, in Lviv, Bandera’s birthplace, events celebrating him were also held and attended by many officials including Maxim Kozitsky, the head of the Lviv region. He and other officials laid wreaths on a monument for Bandera.

Reacting to the event strongly, Israel’s ambassador Joel Lion rebuked the event on Twitter, saying “We strongly condemn any glorification of collaborators with the Nazi regime. It is time for Ukraine to come to terms with its past.”