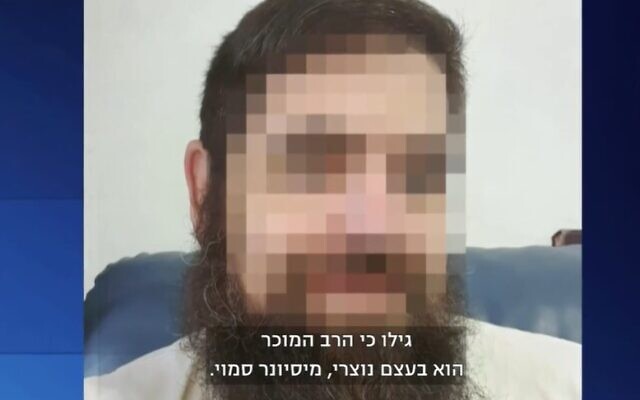 The ultra-orthodox community in Jerusalem is reeling from a major shock following an expose that led to the discovery of a prominent Rabbi, (whose identity has not yet been made public) actually being an undercover Christian missionary from New Jersey, USA.

According to Hebrew media, the man, a rabbi, who was not identified publically, had posed as a cohen and worked as a scribe and a mohel, conducting ritual circumcisions. Beyneynu, a non-profit organization that monitors missionary activity in Israel, said Sunday that it had been “investigating the case of a covert missionary in French Hill for many years,” but had acted to expose him now “due to one of the missionary’s children proselytizing in school.”

“We are confident that the Jewish leaders will act strongly against this threat, and quickly put protective measures in place to protect the Jewish community,” Beyneynu said.

As far as reports are concerned, the family of the Rabbi had reportedly forged documents to show they were Jewish in order to emigrate to Israel under the Law of Return but were originally from New Jersey. The wife had reportedly falsely claimed to be the daughter of Holocaust survivors.

What gave out the family was that the family’s parents in the US were not Jewish and were seen posting missionary material on social media. The man’s late father was buried in a non-Jewish cemetery. An obituary identified him as a member of the Friendship Mennonite Church. According to a member of Beyneynu, the father had also recently begun to try and get rid of the evidence, deleting things on social media, and had stopped sending his daughters to the local religious school, so they decided to inform the community of his activities.

The community who helped the family, especially after the death of the “Rabbi’s” wife, was taken aback by the developments, claiming that they did their absolute best in helping the family out with donations.

Yoni Kayman, a community member involved in the investigation, told Israel’s Channel 13 that, “The family looked completely ultra-Orthodox, he had a long beard and a hat, the boys had side-curls, the girls went to ‘Beis Ya’akov’ schools. For five years we have been supporting them, paying for their groceries, school busses, for everything, and they deceived us.”