Upcoming iPhone May Have Always-On Display Like Apple Watch

A new leak by Bloomberg’s popular tech journalist Mark Gurman has suggested that the upcoming iPhone, which is expected to arrive this fall, will feature an always-on display similar to Apple’s Watch, and which Android phones have had for some time.

Gurman wrote in a report that the phones will have improved battery life, a smaller notch on the screen, better video recording, a 120Hz refresh rate, and a faster A15 chip.

Earlier this year, leaker Max Weinbach also hinted that Apple may use the same kind of low-temperature polycrystalline oxide (LTPO) panels that its Watches have on future iPhones. 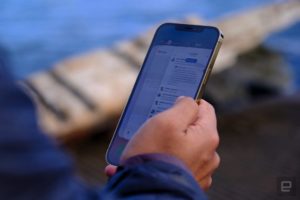 Analyst Ming-Chi Kuo also said earlier this year that the Pro iPhones coming this year would have LTPO displays and 120Hz refresh rates. In the same newsletter, Gurman also reported that Apple will likely announce new MacBook Pros this fall, “between September and November at the latest.” The computers will begin production in the third quarter, he adds.

Other rumors have also indicated that Apple’s 2021 iPhones might finally have a smaller notch and, for some models, faster refresh rate displays. The two iPhone 13 Pro models will also have 120Hz refresh rate screens thanks to LTPO display technology, according to Kuo, finally bringing the iPhone on par with many Android flagships’ high refresh rate screens.

Kuo had also said that the iPhone 13 devices will still have a Lightning port, will have Qualcomm’s Snapdragon X60 modem, and will have larger battery capacities than the iPhone 12.

Emergency services are on the scene right before t

At the National Night Out currently ongoing at the