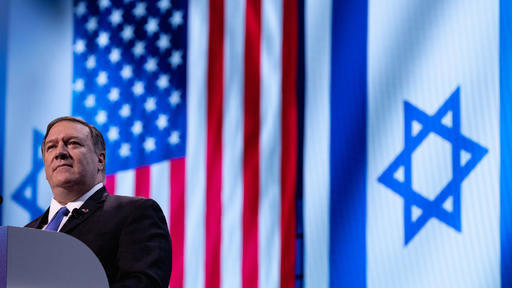 Secretary of State Mike Pompeo is now working with the US State Department to declare several major international human rights groups, including Amnesty International, Human Rights Watch, and Oxfam, “anti-Semitic”, proposing to end American-support for them.

The report by Politico was further confirmed by the Washington Post and stated that a declaration in the form of a report by US Special Envoy for Monitoring and Combating Anti-Semitism Elan Carr was set to be released soon. According to the proposed declaration, certain prominent International Human Rights Groups that have alleged or perceived support for the anti-Israel Boycott, Divestment and Sanctions movement, or any other anti-semitic actions would see the indefinite end of American support in a no-tolerance stance towards the matter.

According to Politico, the draft State Department declaration has acquired most of the information on the matter from NGO Monitor, a pro-Israel site that tracks the activities of human rights and other organizations and often accuses them of being anti-Israel. Furthermore, the media portal has also assessed that this move could be the US’s attempt to gain the confidence of pro-Israel evangelical Christians ahead of the current as well as the 2024 Presidential elections.

This being said, Pompeo has voiced the fact that the United States wanted every nation “to recognize Israel, the rightful Jewish homeland, to acknowledge their fundamental right to exist as a country.” Considering this prime sentiment, the US has and will continue to promote normalization talks with Arabian countries, for the benefit of Israel.

As reported by the Times of Israel, the Jewish State has long accused human rights groups of bias, unfairly targeting Israel over its treatment of the Palestinians.

Last year, Israel’s ambassador to the United Nations Gilad Erdan had threatened to ban Amnesty International from Israel over a report that called on websites like Airbnb, Booking.com, Expedia, and TripAdvisor to boycott listings in Israeli West Bank settlements. Amnesty accused the sites of profiting from “war crimes” by offering accommodation in settlements. In another instance, Israel expelled the local director of Human Rights Watch for allegedly supporting the BDS movement against Israel.

Several notable activists as well as NGO’s have claimed this move to be baseless and even preposterous. T’ruah, a US Jewish human rights organization called the plan ridiculous. “A robust human rights sector is an essential element of a democracy,” said director Rabbi Jill Jacobs in a statement.