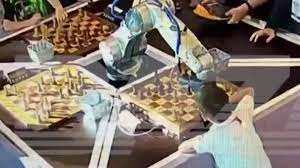 VIDEO: A robot breaks a child’s finger during a chess match

Having a robot as an opponent in a chess match is not a good idea.

A seven-year-old boy suffered slight injuries after a robot designed to play chess reportedly grabbed and broke his finger during a match in Moscow last week.

A video of the incident shows the robot taking its turn, then taking and turning its opponent’s finger as the boy tried to move one of his pieces during a tournament last week. Adults can be seen rushing toward the chess board to free the child, though not before the damage is done.

Lazarev revealed the robot was a rental that had participated in previous matches without incident.

According to reports, the victim figuratively picked up the pieces the following day by completing the tournament while wearing a cast.