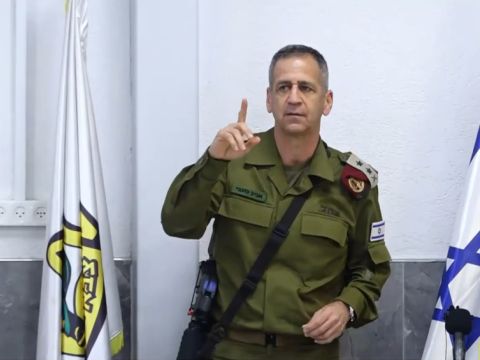 Chareidi MKs and religious soldiers chided Israeli Chief of Staff Aviv Kochavi for giving a briefing to IDF spokesmen during the course of the Friday night meal.

The MKS and soldiers said what Kochavi did violate army regulations.

According to reports, Kochavi faced the cameras and said that “our task is simple: we must stop terror, restore security and a sense of security.”

Kochavi also spoke to individual soldiers while facing the camera while religious soldiers were sitting at the table for their Friday night meal.

Sources said there was no aspect of Pikuach Nefesh (life-threatening emergency).

The Torat Lechima organization said that “it is unthinkable that the most senior officer in the IDF should trample the sanctity of the Shabbat in the only Jewish army in the world while violating express army directives.

“What example will his soldiers get from this? What values? The chief of staff must apologize to his soldiers for his actions,” the group said.

Arbel said that it is not enough for the chief of staff to apologize as there are rules and regulations, and whoever violates them must be held accountable.

“The goal was to allow the public maximum access and transparency with the Chief of Staff. We began the preparations before Shabbat, we will learn and improve. It is important for me to stress that there was no intention to offend anyone’s feelings, and if we did, I apologize for this,” Kochav said.