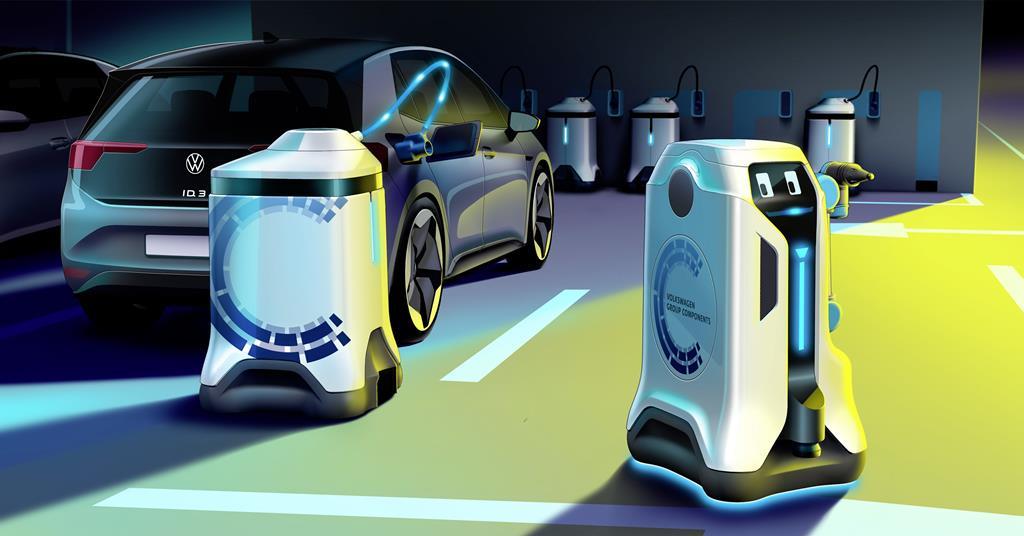 German automaker Volkswagen has now teased an all-new concept featuring an autonomous robot that charges EVs in parking lots. The adorable-looking mid-sized robot, complete with googly-eyes and similarities to R2D2 will supposedly tow batteries to individual vehicles and hook them up to begin charging. Volkswagen said Monday that it is planning a wider launch of these so-called “flexible quick-charging stations” in early 2021.

In a hilarious new video released by VW, the automaker begins its video of its mobile charging robot with the percussion associated with the Terminator movies, it quickly pivots to R2D2-esque noises as it teases its rather cute solution to charging EVs in parking lots without installed charging stations. The prototype then unmoors from its docking station, hooks up to one of a dozen or so mobile batteries, which it then drags to your car. The robot plugs the battery into your car and then returns to its station, ready to field any other charging requests. When your car is done charging (or you return from your errand), the robot collects the battery and brings it back to the charging racks, stopping to let other cars and pedestrians pass by along the way.

The fun new concept is speculated to serve VW’s intention to build on its charging infrastructure to cater to its growing number of EV’s which will be released in the years to come. Since the company chose to word their new teaser as a glimpse, and not a prototype, it seems that there might not be headway with the project as yet.

This being said, these types of non-human attendance systems could allow parking garages to have a charging infrastructure without the need to place a charging station at individual parking stalls. Instead, the rolling battery packs can be charged at a single location and deployed as needed.

Though no other information about the robot was offered, Volkswagen did say, “The mobile charging robot has successfully reached prototype status and will now be comprehensively further developed.”