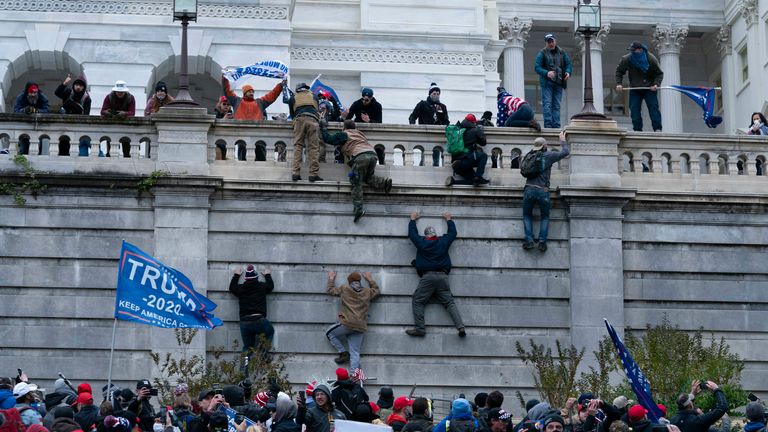 World Leaders React To Violence at the Capitol, Including Lapid, Gantz While Netanyahu Remains Silent

Reacting to the widespread protests that turned violent at the US Capitol yesterday, leaders from around the world took to Twitter to condemn the situation. In Israel, members of opposition parties including Lapid and Gantz also took to censuring the matter, whilst Prime Minister Benjamin Netanyahu who is one of President Trump’s closest allies chose to remain silent.

Weighing in on the matter, UK Prime Minister Boris Johnson tweeted, “Disgraceful scenes in US Congress. The United States stands for democracy around the world and it is now vital that there should be a peaceful and orderly transfer of power.”

French Foreign Minister Jean-Yves Le Drian condemned “a serious attack on democracy… The will and the votes of the American people must be respected.”

French President Emmanuel Macron published in the early hours of Thursday a video on his Twitter account, in which Macron slammed the scenes of violence in Washington DC while also expressing his strength in the democratic process in the United States.

Macron spoke in both English and French in his Twitter video messages, which carried the hashtag of “#WeAreOne.”

“Trump and his supporters should finally accept the decision of American voters and stop trampling on democracy,” German Foreign Minister Heiko Maas tweeted. “The enemies of democracy will be pleased to see these incredible images from Washington DC,” he added. “Inflammatory words turn into violent actions.”

German Finance Minister Olaf Scholz, who is also the vice-chancellor, likewise condemned the “disturbing images” from Washington. “This is an unbearable attack on democracy,” he tweeted, adding that Trump had “deeply divided the country.”

Meanwhile, in Israel, opposition leader Yair Lapid tweeted, “My thoughts are with all my friends in Washington tonight. We hope to see order restored and the transition of power completed. America needs to go back to being a role model for democracies across the world.”

Defense Minister Benny Gantz said the images being broadcast from Washington “hurt the heart of anyone who believes in democracy. I never believed I would see such images from the world’s most powerful democracy. This is proof that before political rivalry, we must agree on the rules of the game: maintaining the rule of law, respect for the democratic process, and respectful dialogue. I hope this horrific event will come to an end soon, without any casualties.”

Despite comments from Gantz, there was no response from Prime Minister Benjamin Netanyahu, several hours after the events began.

Irish premier Micheal Martin, who has invited the Irish-American Biden to visit his ancestral homeland early in his presidency, tweeted his condemnation.

“The Irish people have a deep connection with the United States of America, built up over many generations. I know that many, like me, will be watching the scenes unfolding in Washington DC with great concern and dismay,” Martin said.