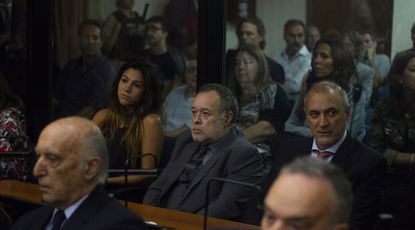 Outraged by the second court ruling that acquitted a bomber involved in the 1994 AMIA Jewish center terrorist attack in Argentina, AMIA and DAIA groups have pledged to now appeal the verdict after a 26-year-long fight for justice.

A federal court in Argentina on Wednesday acquitted the defendant, Carlos Telleldin, who allegedly filled a Renault van engine with explosives in 1994. He then left the car in a parking lot and handed it over to unidentified individuals who carried out the bombing, which killed 85 and injured 300.

In the second trial case of its kind, the court said it would not detail its decision until March 26, offering only a one-line decision “to acquit Carlos Alberto Telleldin for the facts that he was accused,” even though there was enough evidence to convict the car mechanic accused of preparing the deadly car bomb.

“The evidence collected is more than enough to achieve the degree of certainty and to convict the accused on the order of the crime of malicious havoc, in the form of an explosion, followed by deaths, also attributable to malicious intent,” an AMIA attorney said during the trial last month.

The group had called for a punishment of 20 years in prison and has been fighting for this sentencing for two and a half decades now. Telleldin was arrested just one week after the July 1994 attack along with five Buenos Aires police officers who allegedly were involved in the operation, and spent 10 years in prison. But it was uncovered that Telleldin was paid $400,000 in 1995 for his cooperation in the trial, leading a judge to dismiss the evidence collected in the case. Telleldin earned a law degree in prison and practiced when he was released.

Speaking of the second trial, an AMIA spokesperson said, “The Court’s decision shamefully consolidates the path of impunity. “It adds more pain and generates an inexplicable confusion, taking into account the evidence presented.”

Looking at the broader perspective and considering an element of partiality towards Iran, it has been deemed that Iran and Hezbollah have long been linked to the attack. Based on the investigations of the late prosecutor Alberto Nisman, who was Jewish, six Iranians and one Lebanese have been on Interpol’s most-wanted list since 2007, but strong ties between Argentina and Iran seem to be a major roadblock in the conviction.