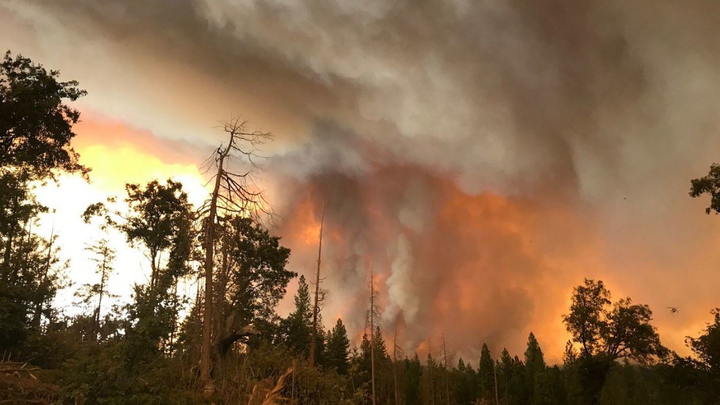 As the raging inferno continued to engulf most of the West Coast on Thursday, one of America’s most popular national parks, Yosemite, was shut down in a response to the severely toxic smoke that filled the air, prompting evacuations in Southern California.

In what is deemed to be one of the worst chains of wildfires, primarily caused due to lightning strikes and human mishaps, the US West Coast has been battling a calamity worse than any other, for the past 3 weeks. Causing widespread air pollution, and filling the air with smoke, the air quality monitor on Thursday, revealed that the pollutant levels were so high, they exceeded the Airnow.gov site index.

Since dangerous air quality is expected at Yosemite for the next several days, the park service announced that the premise that spans nearly 1,200 square miles in the Sierra Nevada Mountains, will be shut for several days and it is unclear as to when it might be safe to open.

Two wildfires were burning near the park, including the massive Creek Fire to the south. The 244,756-acre blaze ignited earlier this month, trapping dozens of people at a campground in the Sierra National Forest and destroying hundreds of homes and other buildings. The fire was 18 percent contained Thursday.

As reported by NBC, South of the Creek Fire, the Bobcat Fire continues to burn across thousands of acres of national forest land in the San Gabriel Mountains. While firefighters have so far kept it from damaging a historic observatory in the Angeles National Forest, the fire roared overnight toward Juniper Hills- an unincorporated community of roughly 400 houses in the San Gabriel foothills. The Los Angeles County Sheriff’s Department issued evacuation orders for Juniper Hills and other nearby communities Thursday afternoon.

As of now, a record 3.4 million acres of land has burned California this year, and experts have pointed towards climate change as possibly the only cause of this gargantuan calamity. Current data shows that twenty-five people have died in the state, and 5,400 structures have burned in the fires. Meanwhile, in Oregon, the wildfires have scorched more than 1 million acres, destroyed more than 1,000 homes, and killed eight people.

In a statement to the media on Thursday, Gov. Kate Brown claimed that the blaze, which took over 191, 238 acres, out of which 20 percent has been contained, was “all-encompassing and shocking.”

Mentioning a possible respite from all the devastation, she said rain is expected on the coast, as well as both slopes of the Cascade Mountains, which span the length of the state, beginning Thursday night. However, Andrew Phelps, director of the Oregon Office of Emergency Management, said that rain could cause flooding the areas that have burned, and has asked citizens to be aware of the possibility.